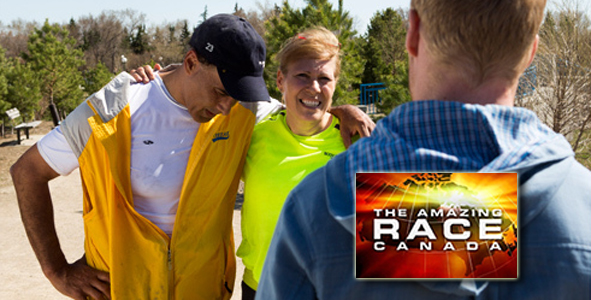 The Saskatchewan Roughriders are something of a Canadian institution. They’re kind of the Green Bay Packers of Canada—small market, huge appeal. No, huge-r than that. Roughriders merchandise apparently outsells all of the other CFL teams combined by a huge margin. Canadians love them some Roughriders. So it’s no wonder that Mosaic Stadium figured prominently in the Amazing Race Canada’s visit to Regina. That was predictable.

What wasn’t predictable? Well, pretty much everything else that happened in this episode. On a leg that celebrates the Roughriders and the Mounties, I guess it’s somewhat fitting to bid a slightly stunned farewell to yet another beloved Canadian institution: Team BodyBreak. 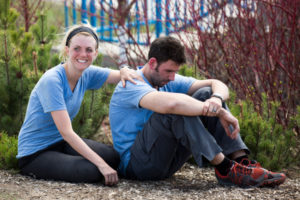 I’m going to be straight with you here—this is one of the most difficult legs I’ve ever seen on ANY season of The Amazing Race. Typically, the Race tends to balance a difficult Roadblock with comparatively easy Detours, or throw in an absolutely killer random Route Marker task in the middle of an otherwise meh leg. Never before have I seen the Race continuously bombard the Racers with impossible-looking tasks. We got an exacting Roadblock, two physically demanding Detour options, and not one, not two, but THREE Route Markers requiring additional action. Add to that an overnight layover, and hold the whole thing on an unseasonably hot day, so that we can get a little killer fatigue into the mix. It’s no wonder so many teams crumpled under the pressure. As Brett said, there was “negative fun” to be had on this leg.

Needle in a haystack tasks have long been a staple of the Amazing Race. Be they sandcastles, coffee beans, sushi, haystacks, or cookies, it’s pretty safe to say that somewhere along the Race, the Racers will be called upon to dig through a big pile of something small, looking for something even smaller. There’s always that annoying team that basically reaches their hand in there and pulls out the needed item immediately (Jet and Dave), and there’s the team who toils away for hours with no luck (Holly and Brett…and Hal and Joanne).

I absolutely understand why these teams took the penalty. Nobody likes it when a team quits a task, of course, and we all want to say we’d never do such a thing, but be honest—if you’ve been digging through the same pile of lentils for hours (literal hours!) and you and/or your partner is coming totally unglued, what else can you do? You don’t want to be that team that Jon has to come and fetch at midnight because everyone else checked in hours ago. Quitting when they did gave the doctors and BodyBreak a fighting chance to at least not be last. Who knew Jody and Cory would find their moose (plural) very shortly after they quit?

Unusual cruelty followed the lentils as teams proceeded to the Roadblock, where the other kind of killer task awaited them—the incredibly specific, incredibly subjective kind. (Think Bollywood dancing, or bodybuilding poses, or empanada-making.) There were so many details to assembling the Mountie pit that almost nobody could possibly get it right the first time. (“The Mountie Pit” is so going to be the name of my Canadian punk band.) Putting this back to back with the lentils was downright evil. Don’t feel bad about crying, Celina—there may be no crying in the RCMP, but I might have cried too. (Incidentally, Jet makes a terrifying-looking cop. No wonder there’s so little crime in Canada.)

Jet and Dave are the team to beat. They’re strong, they’re goofy, and they’re unbelievably lucky. I could see their over-willingness to work with other teams being a stumbling block, but for now it’s not terrible strategy. They do know that Holly and Brett (okay, Holly more than Brett) are capable of falling to the back of the pack. (The less said about that, the better. I’m just kind of shocked that after medical school and residency, Holly isn’t a little better than she is at functioning on no sleep and performing under pressure.) Who would you rather have in front with you—a team where one member drags their crying, complaining partner through the course…or BodyBreak?

Hal and Joanne placed in the top three of every leg up until this one without even breaking a sweat. I was sure they were going to go all the way. So, I guess, were the other teams, because when it came time to U-Turn, the choice was easy. I don’t know how they could possibly have been surprised to see that they’d been U-Turned, given what a giant target they’d painted on their own backs. Their stats spoke for themselves, but the very visible and obvious way in which they finagled their way onto the earlier flight made it even clearer that they weren’t going to go down without a fight. It was prime time to U-Turn them. We can say it’s all part of the game, and it totally is and they’re totally right to do it, but between feuding with the sisters, trying to cut the line last week, and now gleefully casting the first U-Turn, I think the Tims have cemented their place as this season’s villains.

Still, it wasn’t entirely the U-Turn that did BodyBreak in. It was their own attitudes as well. Given their previous performance, I was pretty sure it was impossible to break them, but it turns out I was wrong. All it took was one (to be fair, horrendously difficult) task to wreck their game and make them say things that had to be bleeped (although Joanne swearing will never not be funny). Taking the penalty with a U-Turn looming was probably the nail in their coffin, although Hal pointed out quite rightly that the Race is a combination of skill and luck. They had the former in spades, but the latter eluded them when it counted.

But you haven’t seen the last of BodyBreak, of course. Doubtless you’ll find them in their usual spot sooner or later: the commercial breaks. Until next time, keep fit and have fun!