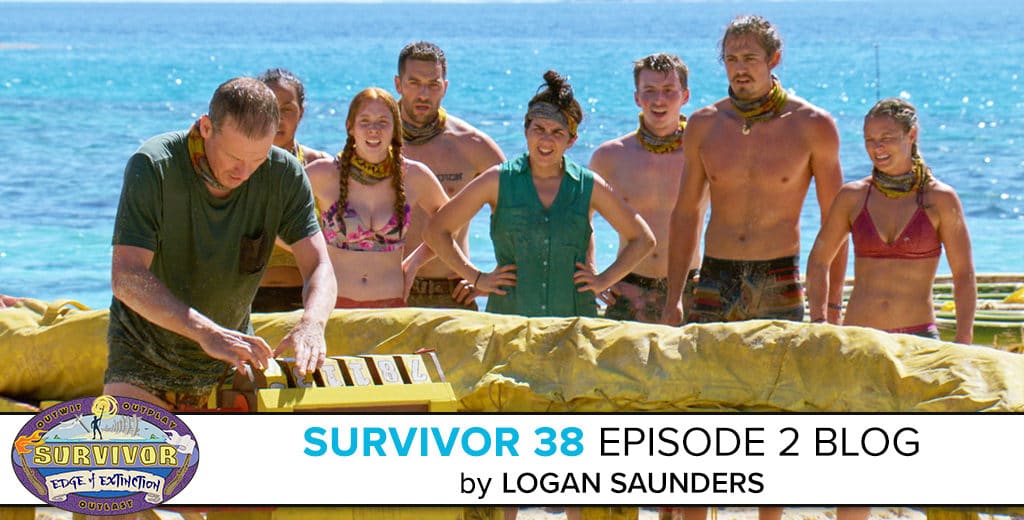 Logan Saunders recaps the second episode of Survivor: Edge of Extinction ahead of episode 3 in his blog without a title this week.

Previously on Survivor: Keith, Reem, and Wendy were isolated by the other members. At Tribal Council, Reem dug her own grave by not letting go of laundry duty. She was the first person to go to the Island of Extinction.

Eighteen are still left; who will be voted out tonight?

Reem has no idea where she is. I thought Wentworth was the one who had the concussion?

REEM: What?! There is no timeline on this?!

Reem is stuck alone and ruminating/reeminating over why she was voted out.

Reem is crying. She tries to start a fire. Lots of wood gathering. She refuses to disappoint her family. . .and folks on social media.

David tells a random tribe member she has “old lady hands.” How flattering.

Wendy blames Wentworth as the ringleader and annoyed that she is trying to befriend everyone on her third chance to mess up the newbies.

She notes David is going with the flow.

WENDY: I think Keith is with me and Rick and David.

Wardog is worried Wendy will soon go idol hunting. All of this goes down while Wentworth chomps down on a stalk of celery. It’s like the scene from The Burbs.

Wentworth suggests to the tribe to have an open idol hunt to ensure Wendy is blocked from picking up an idol.

Did Aubry just grind on a random tribe member?

AUBRY: I like going to Tribal first so I know how everyone works.

Aubry asks Julia and Victoria how they feel about returnees in the game. Aubry is so going first out of the four returnees.

We see a montage of Aubry having the tribe remind her of herself and wanting a dialogue. It sounds very robotic when she has these conversations too. It’s not personable at all.

David is aware Wentworth will eventually take him out. He chats with Rick about when it will be time to eliminate Wentworth. Wendy approaches them again to use Keith and Wardog to make a five.

David identifies Wendy’s loyalty. He has a genuine interaction with Rick. They make an alliance. It is highly reminiscent of his alliance with Ken in Millennials vs. Gen X but with less abs.

Gavin is a huge fan. More idol hunting. Eric is doing it too.

JULIA: Do you think there’s idols out here?

Well, since we haven’t had an idol-less season since Palau which aired fifteen years ago. . .yeah, I think they are in play.

Victoria has no idea how to look for an idol.

Oh god. More idol hunting. Lauren’s favourite players are Parvati and Wentworth. We get a flashback to both of Wentworth’s idol finds.

After half of an episode, Lauren is the one to grab the hidden immunity idol. She is keeping it a secret.

LAUREN: I am definitely not telling her.

This episode is the epitome of all of the critiques people have of modern Survivor.

This challenge is like that one immunity challenge from Koah Rong. Get into a cage in the water. Release a snake from the cage. Transport the snake over the cage and bring it to shore. Place it in a cradle. Untie knots releasing number tiles. Number tiles opens a combination lock. Eight rings are released. Throw eight rings onto targets to spell the word IMMUNITY.

That is a challenge with a decent length, and no, I am not talking about the snake.

A few knives and a cutting board or a deluxe Survivor fishing kit. That’s their reward in addition to immunity.

AUBRY: That is one heavy snake.

Probst points out Aubry did this challenge and confirms my historical knowledge. We are getting Second Chances flashbacks.

Julie is sitting out for Kama. Hello New Chelsea.

Wendy is an excellent swimmer; Keith is not. Keith needs to be led to the cage. Poor guy. His technique is HORRIBLE. Even on top of the cage he hesitates to jump in. This isn’t good.

Kama is hoisting the snake over the cage. Aurora looks like she is ready for a sequel to Wentworth’s concussion. Does Probst have a sore throat? His commentary sounds rough.

Keith is doing NOTHING to help push the snake over. This is the difference between a 19 year old Michael in Ghost Island and a 19 year old Keith here in EoE.

Aurora was using all of the weight to dangle off of the snake to pull it over. That takes balls.

Kama’s lead over Manu isn’t huge as they put the snake in the cradle. God. Manu is dragging Keith as well as the snake. He hangs back after it is in the cradle.

Ron releases the rings from the combination lock. David is trying to make up time for Manu. He gets it out a minute or so later.

Suddenly Manu and Kama are tied 1-1 on the ring toss. It is all coming down to a carnival game.

Manu gets teased with an in-and-out toss.

Joey “I Am Hanging Back” Anglim is tossing in rings.

Keith volunteers himself to do the rings. The technique isn’t too great. Chris subs back in. He gets the third target.

Joe hooks the sixth target for Kama. Let’s just fast forward to early post-merge phase where Joe is voted out.

Eric subs in for Joe so he doesn’t do -all- of the work and he succeeds. Kama wins immunity! See, Joey Amazing only got like 6 or 7 of the eight rings. In the other two seasons, he would’ve done all eight.

Kama picks up the fishing gear.

Despite the fact that the past fourteen seasons have had a switch withing 2-4 rounds of play, Wardog wants to eliminate Keith for being weak even though long-term voting doesn’t matter pre-merge anymore due to the abundance of switches.

Keith worries his name is on the chopping block. He is right.

Wentworth is annoyed Wardog is focused on challenge strength. Wardog proceeds to campaign to David too.

David reads Wardog correctly and backs off from the Wentworth Blindside plan. He knows Wardog ain’t gonna go along with it cause that’s what Wardog do.

Chris and Keith have a chat after Keith renews his vow to pledge allegiance to Chris.

Chris pitches to Rick to go after Wentworth. Rick sneaks off to David to report the news. Rick, David, Chris, Wendy, and Keith are the proposed five. They can keep Wardog and Lauren in the dark.

Chris blows it and lets Wardog in on the plan. Wardog says Wentworth is a fantastic shield.

WARDOG: I don’t want anybod to think this is my plan. . .I want everyone to feel it is their plan. I don’t want to be seen as calling the shots.

Too late, Wardog. If somebody names themselves Wardog I don’t think they can get away with a subtle game.

Wentworth will be pissed if she goes home before Keith. C’mon girl, give the newbies a chance.

For the second TC in a row, Wentworth is in the hot seat. She has to go back on the defensive. For some reason, everyone is focusing on long term challenge strength.

We switch to whether or not tonight will be a blindside.

Wardog talks about being rational. Siiiigh.

We finally vote after shoulder rubbing between David and Rick/Devin/whatever he is going by.

Nobody is playing an idol.

Nobody took their shot tonight. They voted out the 19 year old loyal tribe member who could be dumped at anytime.

Keith keeps walking down the path. He sees the path.

He reads both signs.

No parting words from Probst at the end of a Tribal Council since maybe. . .Palau when Ian gave up immunity at Final Three? Nobody else gets reaction shots. We end with Keith on the path.

Next Time: When the cat’s out of the bag, you’ll need a pack mentality or you’ll catch a bad break.

Reem is on EoE. She threatens to raise the white flag if nobody else shows up.

This group is not meshing well at all in an interesting way. They don’t know how to play off of each other.

Wentworth and Aubry are gamebots once again, David throws in funny quips here and there, Joe is winning challenges, and we have to listen to the American version of Zach from Australian Survivor leading up to Tribal Council.

Most of the entertainment was on Kama this week but thanks to two tribal wins they have had very little content. The Aubry Montage is the biggest highlight after two rounds. Let’s have a dialogue if you think otherwise.

I think Manu is on a trajectory to be the most boring tribe in Survivor history. . . . .nah, La Mina might still hang onto that title.

The same complaint we made during Redemption Island can be made here during Edge of Extinction (other than the fact players can return within the same season): Tribal Councils aren’t as powerful or worthy of our investment if the person getting voted out doesn’t leave the game until the white sail is raised.

The White Sail is now our Tribal Council and has replaced the snuffer.

Let’s give it a couple more episodes and see where it goes.