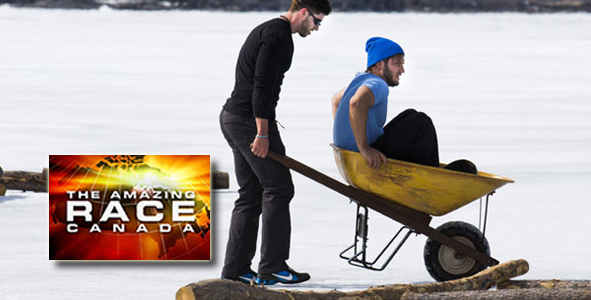 Is history repeating itself? This week on The Amazing Race: Canada, we find teams making two mistakes that figured prominently in last season of its American counterpart, one of which was so big that it directly led to a team’s elimination in both the U.S. and Canadian shows. But even as teams make some of the same mistakes, the incredible scenery in Yellowknife and Carcross (or as Holly called it, “Carcass”), coupled with great tasks and competitive racing, continued to elevate this show above being merely a clone of its sister show to the South. When they announced that the Race wouldn’t leave Canada, the Territories were the region I was most looking forward to seeing, and they definitely didn’t disappoint. 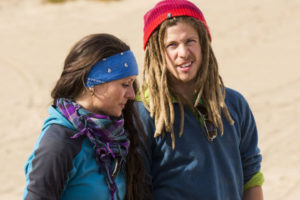 If John and Jessica (who are newly engaged, by the way! congratulations, guys!) can bring themselves to ever watch the show again and are sufficiently intrigued to dig up seasons from other countries, I have a feeling this episode will make them feel a little bit better about their Amazing Race legacy. In fact, should the Eliminated with an Express Pass in Your Hand Club ever hold meetings, they’ll even buy Darren and Kristen the first round of Molsons (or, like, a Natureland Organic seasonal ale or something). Because while Team Tan shocked us with their stubborn unwillingness to bail themselves out, the hippies just made an even dumber move.

Unlike John and Jessica, who had concluded with insufficient evidence that there was at least one team behind them, the hippies had all of the evidence in front of them that they were at the very back of the pack. In fact, at their last checkpoint, they had an actual list in front of them of who was in what place. (Well, more or less. We’ll get to that too.) They knew they were on the last flight with two other teams, one of which clearly used the Express Pass some nice people had given them on the previous leg, and one of which Darren and Kristen could see from where they were standing. John and Jess didn’t have the luxury of being able to see the other Detour, so they could possibly be forgiven for thinking another team would be stuck on it.

Not so here. The hippies could track Jody and Cory’s progress just a few yards away. Maybe they thought they could beat the brothers in a foot race, but why fight it out for last place if you have another option? Race circumstances do not align any more perfectly than this to create an opportunity to be saved by an Express Pass. Vanessa and Celina recognized it, because while they continue to have zero sense of direction and seem to have skimmed over the rules for checking in at the mat, they definitely aren’t lacking strategic minds.

So let’s talk about the other mistake that might have you feeling a little bit of deja vu. When Jody and Cory arrived at the charter flight office, Cory grabbed the marker and wrote the team’s name on a blank line, not realizing that he’d skipped a line and had actually signed them up for the third flight rather than the second. The derby moms made the exact same mistake on the U.S. race last season, with similar race-handicapping consequences. Asking Bodybreak to switch flights after the brothers realized their mistake wasn’t exactly sporting, either, and Hal and Joanne were totally within their rights to say no. Between that and having to do the Roadblock twice, if there’s an anti-MVP of the remaining racers this week, it’s clearly Cory. Jody, on the other hand, seemed to do fine—it wasn’t until the final dash to the mat that I even remembered that he didn’t have legs.

The Tims confronted their Speed Bump in good spirits as they encountered an old favorite Race feature—the costumed actor pretending to be a historical figure. I wasn’t so impressed with Fake Robert Service, though. After Junior’s first botched attempt at reciting the poem, he sort of phoned in his “that’s not the way I penned this poem”s. He could take some lessons from Fake Robert Burns. I do, however, like that almost every task adjudicator this season has greeted failures with a “sorry.” That seems appropriately Canadian. Also appropriately Canadian—did I see the Tims with a Tim Hortons bag in the airport?

Surprise, surprise, Hal and Joanne had another great week, though their perky facades did slip a little bit when they got a little bit lost in Yellowknife. They recovered quickly, though. I wouldn’t be surprised if there’s some old Bodybreak segment involving sawing logs and pushing each other in a wheelbarrow. I’ll watch their Twitter feed to see if they dig it out of the vault. Jet and Dave had another great week and ran a pretty much flawless leg. When Tim Junior tried to cut in front of Dave at the roadblock, Dave quite brilliantly turned the crowd against him and shamed him into stepping back. They’re still fratty meatheads, but gosh darn it, they are charming fratty meatheads, and I was happy to see them win the leg.

Last week, Holly stumbled on a Roadblock and lost her confidence, and the doctors almost finished in last place. Proving yet again that Brett is the strategic genius of the season, he made a move this week that shows that not only does he know how to succeed in reality television, he knows how to talk to his partner. By insisting that Holly take the Roadblock again, he set her up to succceed, which helped her get her confidence back and enabled the doctors to claw their way back up to the front of the pack. Think of how many times we’ve seen Racers yelling at their partners, snarking about how incapable they are, telling them to hustle, and otherwise just making things worse. Instead of treating her like dead weight, Brett found a way to bring out the best in his partner, which makes him not just an awesome racer, but an awesome husband.

Next week: the U-Turn makes its first appearance and Holly faces adversity suboptimally yet again. Please let that be creative editing.