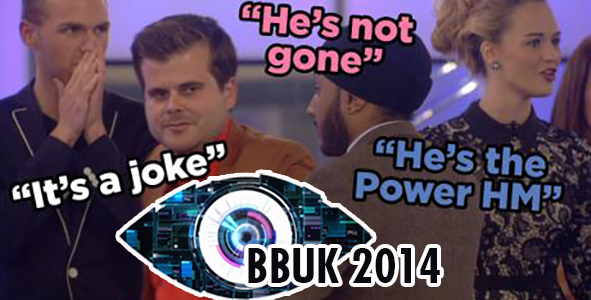 Join Curt Clark (@curtclark) and Malory Beazley (@SurvivorBee) as they cover the last week of nominations in the Big Brother UK house!  With Finale Week looming, Curt and Malory cover how The Power of Money impacted the house…as well as the most shocking eviction of the season!

In Friday’s double-eviction, neither Malory or Curt were surprised that Mark was the first person to leave the Big Brother house, but both were shocked that Winston, a favorite of the live crowd each eviction night, ended up following closely on this heels. While signs may point to an Irish Alliance of voters trying to eliminate Ashleigh and Christopher’s biggest competition, both Malory and Curt suspected that Winston’s association with week-to-week villain Helen likely didn’t help his chances.
Also discussed this week was The Power of Money, where housemates had a chance to add an additional 25,000 Pounds to the winner’s purse.  After accruing 15,500 pounds, all houseguests (except Ashleigh) were given a dilemma…take the additional money for themselves, or keep it in the winner’s fund.  Curt and Malory discuss the reasoning behind Ash, Chris and Mark each saying they’d take the money…and marvel at the extent to which Chris is raked over the coals for his decision, while Ash and Mark are left unscathed.
Also covered on the podcast:
Stay tuned next weekend for coverage of the Big Brother UK finale!