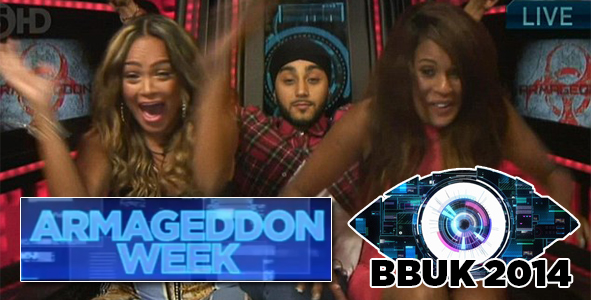 Join Curt Clark (@CurtClark) and Malory Beazley (@Survivor__Bitch) on Reality TV RHAP-Ups as they talk through the events of Week 6 in the Big Brother UK house.

In this week’s coverage of Big Brother UK, Curt Clark (@curtclark) and Malory Beazley (@survivor__bitch) discuss the events of Armageddon Week on the houseguests and the potential impact on the game moving forward.

With so much having happened this week, Malory and Curt almost forgot about Marlon Wallen’s “instant eviction” in the house, but neither of them were terribly surprised nor disappointed that it happened.  They discuss how it was a strange time in the house, with everyone seemingly getting along and Marlon somewhat drifting from the Cool Kids to the Outsiders group.  The perfect time for things to get shaken up by Armageddon.  With houseguests nominated normally, nobody suspected that the nomination reveal was going to also be an eviction, and that Marlon would end up leaving in his underwear.
Immediately on the heels of this, three new houseguests moved in: Zoe Birkett, Pavandeep “Pav” Paul and Biannca Lake.  Both Curt and Malory instantly became Zoe fans, with her straightforward and down-to-earth attitude, and Curt really liking her condemnation against people who are “getting it on” in the bedroom (and the reaction this drew from Steven Goode and Kimberly Kisselovich).  Malory was not a big Pav fan, as the week progressed, although Curt is hoping he stirs things up a bit more than he has.
And then there is Biannca.
Malory and Curt both saw Biannca’s presence in the house as disturbing and one-note…and while she was constantly flashing her “assets” (which Curt wanted to name “Big” and “Brother”), it got old quickly, and seemed a little desperate…as did her constant advances toward Winston Showan.  Malory and Curt went back and forth on how much of Biannca’s behavior was an act, but Curt notes that she did seem hurt or put off when she found out she wasn’t Winston’s type and that he wasn’t interested in her.  Ultimately, both Malory and Curt were glad that she was chosen to go…but neither has much hope that Pav is long for this world.
The big drama that came along with the new houseguests was Biannca’s determination to reveal to everyone that Danielle McMahon is “not who she says she is”  outside the house.  This seemed to really eat at Danielle over the week, but Malory and Curt both loved Chris Wright’s speech in the diary room, where he declared that he doesn’t really care about what she’s done in the past or outside the house…that he is judging her based on how she’s treated him in the house and he finds the whole thing ridiculous. Other drama arose during the True/False task, where it came out that Danielle was in a documentary called “Webcam Girls,” that Ash Harrison’s mom won’t be asking Helen Wood about over for dinner…and that Kimberly’s actions in bed with Steven are making their way through Twitter.
Ultimately, the three new houseguests had to select someone to be evicted, but unknown to them, they weren’t going to get a chance to do so until after one of them (whoever received the least votes “to save”) was removed from the house.  This ended up being Biannca…which ultimately led to Pav and Zoe selecting Danielle as the next evicted housemate (despite an apparent agreement earlier to evict Ashleigh Coyle).  They had all wanted Kimberly to be the main target, but as we’ll see, this was not an option on eviction night.
There was some discussion as well of the couples in the house, with both Malory and Curt enjoying the on-going relationship between Mark Byron and Christopher Hall, although both think that Christopher is more into Mark than Mark is into him.  Both also found it interesting that Ash and Helen finally made out.  However, the big relationship story was the ever-evolving showmance between Steven and Kimberly, with them breaking out into arguments throughout the week.  It was all capped off by the news that Kim was not present during the live eviction for health reasons (which made her immune to the eviction)…and which led to Curt and Malory’s first spoiler section, where they discussed how Kimberly had opted not to return to the show!  Malory is interested to see the impact that this has on Steven, and Curt wonders whether Steven will spiral back into control, or if he’ll lose it even more than he seems to have already.
Both Curt and Malory are wondering what next week’s Power Trip twist will be…and whether Kimberly’s premature departure will have any impact on Big Brother‘s plans!