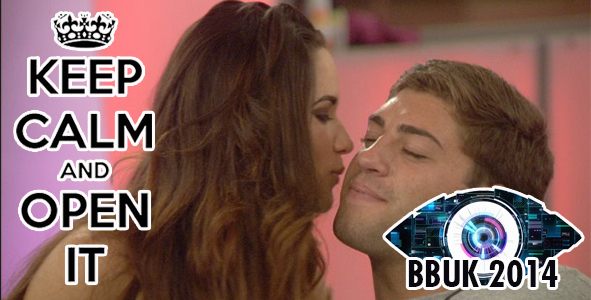 Join Curt Clark (@CurtClark) and Malory Beazley (@Survivor__Bitch) on Reality TV RHAP-Ups as they talk through the events of Week 5 in the Big Brother UK house.

It’s Week 5 in the Big Brother UK house, and once again Malory Beazley (@Survivor__Bitch) and Curt Clark (@curtclark) cover the week’s events for Reality TV RHAP-Ups.  While both Malory and Curt acknowledge that the eviction of Jale Karaturp over Ashleigh Coyle is the most recent news item, they both agree that the romance/showmance/cringemance between Steven Goode and Kimberly Kisselovich dominated the show this week and was the main headline for discussion.

Curt and Malory traced the acceleration of the “Steverly” pairing this week, from such innocent conversation topics, such as Steven asking Kimberly if he’d make a good husband and subtly planning their post-show living situation…to full-on make-out sessions and explicit night-vision scenes together that would make a UK censor blush.  From the upside and downside of signing a pre-nup, to Steven’s mom’s reaction to Kimberly…it was a kicker of a week for Kimberly and Steven.
After much discussion about how “wrong” that relationship is, they turn their eyes back to the Jale eviction, and feel that it was a mix of Jale’s association with Helen and an internet movement to save Ashleigh that was responsible for Jale’s eviction.  While both Curt and Malory were happy for Ashleigh to stay, this led to a natural discussion of this week’s “App Store” shopping task, and reflection upon Marlon Wallen saving himself during the climax of the task…with consideration that it was likely a good thing for him to do, given that Ashleigh was NOT the person to go home that night (and that it likely would have been him had he not saved himself).  They also discuss the overreaction of many to Marlon’s decision, including Winston Showan’s complete 180 on one of his best mates in the house.
The other “App Store” temptations were discussed, including Steven’s mom’s warning about Kimberly, Christopher Hall’s and Winston’s social media poll, and the inside look that Jale, Kimberly and Helen Wood got at the gossip in the Big Brother house.
And there was some discussion about the blossoming showmance between Christopher and Mark Byron.
Much conjecture also took place around Big Brother Armageddon, in which one player will receive a surprise (and instant) eviction on Monday, and three new housemates will enter the house.  Malory and Curt agree that the top contenders to go home are Ashleigh and Marlon, but neither is certain about who will come into the house.  While Malory is hoping that it will be some people who have an existing relationship with people in the house, Curt is pretty certain it is going to be three new, and unrelated, housemates.  But both Malory and Curt are pretty certain that it’s going to be a bumpy ride in Week 6!

Join Curt Clark (@CurtClark) and Malory Beazley (@Survivor__Bitch) on Reality TV RHAP-Ups as they talk through the events of Week 5 in the Big Brother UK house.