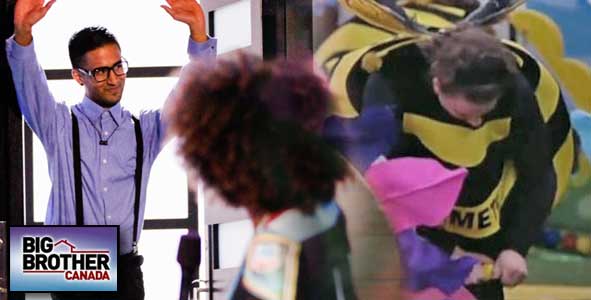 You won't BEE-lieve what happened this week.
Now playing

Rob and Brian started the show by discussing the “Power Shift” twist that was used on Thursday night’s live eviction show. Canadian viewers were given the option to save either Suzette or AJ from eviction and Canada chose to save Suzette forcing Tom to put up a replacement nomination. Tom chose to put Aneal on the block and the majority of the house voted to take Aneal. It was a double back door eviction that left both Rob and Brian upset.

Rob thinks it was much too early in the game for this kind of twist and Brian agreed. Rob said the producers should wait until thinks get boring before doing something like this in the third week. Rob also compared it to the events from Big Brother 11 that caused Chima to quit the game.

Rob and Brian discuss the game that Liza is playing and the relationships that she is having with Tom, Peter and Andrew in the house. Rob thinks Peter may be making a mistake by confiding so much in Liza.

Turning to the events that took place since Thursday night, Rob explains how viewers were upset that Emmett cheated in the HoH competition. Brian tells us how Big Brother stripped Emmett and made him and the other players who held the balls in their hands in to have nots for the week. After a new HOH competition was held, Gary was the new HOH.

Brian explains that many of the houseguests are annoyed with Liza and she could be on the block. Brian believes that Gary will put Tom and Liza on the block this week with Liza being the likely target. Rob wonders if Peter will push for Tom to leave to get closer with Liza.

Subscribe to the Big Brother only feed of Rob Has a Podcast: