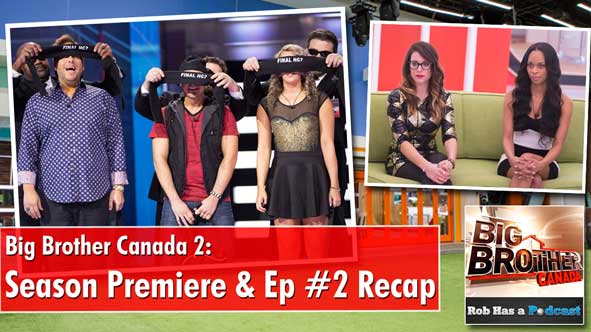 Rob, Brian, Ian, Rob’s Bobblehead get together to discuss the first week in the Big Brother Canada House. Many Americans are struggling to find reputable feeds and videos online – Rob has been using dailymotion.com. Ian Terry joins at 28 minutes in, looking mighty fancy live from a Courtyard Marriott.

The Love Revolution is over: Anick was voted out in a landslide 11-0

Why was she voted out? Too weird? Rob was never high on Anick, but Brian liked her, and thought she got a raw deal in the house. Was Andrew the real target, and was Anick just a victim of Andrew winning the veto?

Paul:  Too Hard, Too Fast

Paul is the poster child of how not to play week 1 of Big Brother. How many missteps did Paul take? (spoiler alert; a lot). Was his deal good strategy? Absolutely not, Brian thinks he should have feigned injury. Which BBUS Jerry is Paul most like?  Listeners did not think Paul utilized his HOH well; he should have made a stronger alliance. Ian agrees Paul is a hot mess, he originally wanted Paul as a winner pick, but changed to John Pardy last minute, because he reminds him as a more competent version of Alex Stein. Paul made a bad choice in making the deal, but he thinks everyone else made a good choice in taking the deal

How much are they seeing? Can see the live feeds, but have no audio. We’re all still really confused about the amenities of the War room

Alex Stein makes his return to Rob Has a Podcast to talk about his appearance on Bravo’s new show, ‘ Online Dating Rituals of the American Male’ airing on March 9th, 2014.