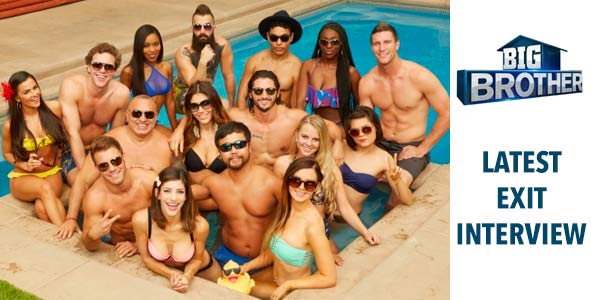 RHAP gets four of our Big Brother 18 questions answered by the very first jury member of CBS’s BB18 on August 6, 2016. Stay tuned to RHAP for more exclusive BB18 content and exit press from your boy as the season continues! #Friendship

RHAP: Why were the vets unable to stick together? What do you think the biggest problem was?

Da’Vonne: Frank! Definitely the biggest problem was Frank. I think what ruined us was when Frank blew up the 8-pack he didn’t take James, Nicole and I with him to have the conversation. It showed that he was focused on himself and no so much our core four. It sucks because once the 8-pack was formed, I thought we had figured it out.

RHAP: When do you think the point was that the house turned against you? In hindsight, what do you think you could have done to prevent it?

Da’Vonne: Definitely when all of the Tiffany and Frank stuff was going on. At that point I knew that people had turned against me. If I could hit rewind, I wouldn’t have been vocal about me wanting those two out of the house. I just felt like I had to defend myself because no one else in the house was going to do it for me. There were times when Tiffany was asleep and Frank was campaigning for her. Then they would switch off. Frank would sleep and Tiffany would campaign for him. Both throwing me under the bus. All I had was me.

RHAP: What do you think it was that made it so hard for you and Nicole to get on the same page and stay there?

Da’Vonne: Paranoia. In that house paranoia is HUGE and any seed that is planted has the potential to be watered and blossom into something terrible. Because we know this game and are both super fans it was let me get you before you get me. In this case, she won.

RHAP: How safe did Da’Vonne feel going in to the vote and did she take any comfort in the “Round Trip” ticket potentially saving her?

Da’Vonne: I didn’t feel safe at all. When Paul asked me to become a pawn I knew this could be my week. I was excited about the round trip ticket because I knew if I had the opportunity to come back I was going to come back strong.

Get up-to-date on the latest developments in the Big Brother 18 house with this week’s Friday HOH Report from Thursday Night’s Live Feeds: