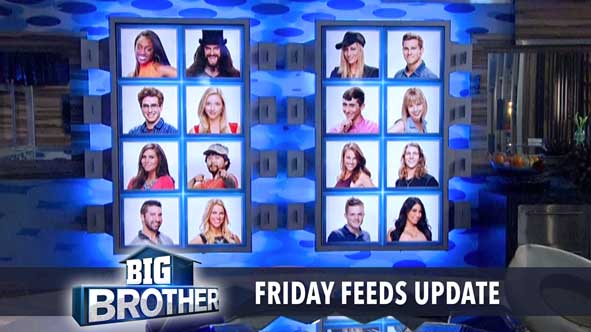 RHAP: Who were you most hoping to see follow you out the door? Why?

SHELLI: If it was Vanessa or James, I would like the fact that only of us has to go back in but at the same time, if I get back in the game, I would like to have them as my targets. I feel Austin and the twins are just coasting along at this point so it would nice to see that someone had the balls to split them up.

RHAP: How much harder was it to play the game without Clay in the house? Do you feel like you’d be able to go back in and play a strong, strategic game without him?

S: The week after Clay left was the hardest week in the house so far. It was very hard not having that “ride or die,” someone you could talk to about ANYTHING. You need someone like that to talk to in the house or you will go crazy. But now I have a fire inside of me that will help fuel me through this game like the firecracker I know I am.

RHAP: Do you think the decision to take back Clay’s shirt from James when you were on the block ultimately hurt your game at all?

S: Seriously? Was James mad that I took the shirt back when he was wearing it blatantly in front of my face as a dig? Dig for a dig.

RHAP: The one piece of information we knew you had and didn’t see you really try to utilize during your campaign to stay was the existence of the Sixth Sense. What made you decide not to throw that alliance under the bus?

S: Well shoot, I guess I should have. But I think I essentially did. The sixth sense was created by Vanessa and involved Vanessa, Austin, the twins, Clay and myself. Vanessa had then set the whole house up to get on board to send Clay and me out the door so in my campaigning, I talked about Vanessa, Austin and the twins never leaving each other. I guess I could have thrown it out there that it originated as the six of us but when you’re in that house you really don’t know what approach to take and what is the best action. Plus, when you know you’re going to be the first person in the jury, you need to be careful about who you could possibly be back in the house with.

RHAP: Now that you’ve had some time to reflect, would you work with Vanessa again should you get back into the game? Why/why not?

S: I would do the same thing Vanessa did to me. I would work with her when it benefited my game and as soon as I have a chance to get her out of the game, that’s what I’d do. An eye for an eye.

RHAP: If you get back in the house, who would you try to get close to in the game that you weren’t tight with previously? Why?

S: That’s a weird question to answer because I’m tight with everyone personally. Game wise, I’d like to work with Jackie and Becky (girl power!).

RHAP: If you get back in the house, who would you target FIRST? Why?

RHAP: Is there a particular in-game decision you regret? How would you handle it differently now?

S: Absolutely, there is one big regret that burns me. I regret not sending Austin out when we could and having to say goodbye to sweet Jason.

RHAP: What did Jeff’s eviction change for you in terms of strategy?

Jackie: After Jeff’s eviction it really gave me the drive to start playing the game. Jeff was more outspoken early in the game and I was able to lay low and get more information without putting myself out there too much. It really helped me move forward in the game with the ammo he gave me to start playing a better game.

RHAP: We saw you develop what looked to be a very close bond with Becky in the early going. Do you think you could have done more to control her nominees this past week, and do you think it would have benefited you to do so?

J: I think Becky’s nominations were perfect.Wwe had discussed this as a team and we really were planning to evict Vanessa if all went well with the plans. At the end of the day both Shelli and Vanessa were on the block which were two big targets in the house so it was a tough decision which one should go first. I wanted to stand by Becky in her decision to evict Vanessa but Meg and James were adamant about evicting Shelli this week but I had to stick to my gut and I made that decision at the end as well.

RHAP: If you get back in the house, who would you try to get close to in the game that you weren’t tight with previously?

J: I honestly feel I good relations with every single houseguest. I didn’t view myself as a target for anyone. I know I may have been a threat in the game coming in to the house with a team mate from TAR but I did the best I could in not being too threatening and really tried to get to know everybody but at the end of the day my loyalties were to my alliance.

RHAP: If you get back in the house, who would you target FIRST? Why?

J: My target before I was evicted was Vanessa. I feel she would still be my target going back in the house if she isn’t already evicted. She has caused a lot of damage to my personal game.

RHAP: Is there a particular in-game decision you regret? How would you handle it differently now?

J: An in game decision I would regret is trusting to work with Vanessa during my HOH. During that time I had given her a lot of personal info to my game plans which I feel at the end was used against me because she changed our plans to benefit herself.

RHAP: Do you still think evicting Shelli over Vanessa was the better move for your game? Why/why not?

J: Yes. In this game you have to stick to your gut and that is what my gut was telling me to do. It was a group decision and in the long run it looked like this decision would be the best for our group.

RHAP: Do you feel like there was more you could have done to build up trust/loyalty with Steve, or did someone just get in his ear at the right time?

J: I felt I was building that relationship with Steve in the past week or so. Steve had been opening up to me recently about his game plans and I did as well. The night before my eviction, I had a good talk with Steve on who we were intending on targeting for the double eviction and since Steve made it seem like he wasn’t targeting me, I let him know I was rooting for him to win HOH because I thought it was time for him to prove himself in this game. Little did I know, I was his target all along. Which makes it seem like someone must have gotten in his ear.

RHAP: Do you believe Steve’s explanation as to why he nominated you?  Why/Why not?

J: I don’t believe that is the only reason why Steve decided to nominate me. I think there will be more to come out later.