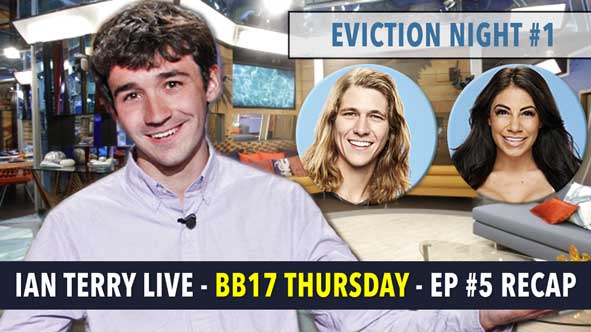 Rob Cesternino is joined by Ian Terry and Brent Wolgamott on July 2, 2015 to recap episode 5 of Big Brother 17, where we saw Jace become the first houseguest to be evicted.

Rob begins the podcast with discussing Kathy Griffin’s takeover twist. Ian would prefer this twist if the person could nullify less than three votes, Ian thinks three is too much power. Rob speculates that it could be Audrey that answers the seventh call but Ian doesn’t think that it would be likely. Rob also comments that he would not be complaining if Audrey got the seventh call.

Ian feels that Audrey’s vote to evict Jackie is a classic James Rhine hinky vote. Ian thinks that Audrey will try and pin the vote on someone else and she will completely over play it. Brent would like to think that she will not bring it up, Brent thinks Da’Vonne may go on the war path to try and find the person. Rob thinks that the house will point at Audrey anyway and because of this Rob feels she should pretend that someone set her up but Ian doesn’t think she could do it.

Rob noticed that Julie’s wording when she was announcing the vote was different to what she does every season. Julie did not say how many votes Jackie received and Rob speculates that it could be because Audrey voted against the house but Ian doesn’t buy too much into it.

Brent points out that the reason that we didn’t see a second of Jackie campaigning on the show was because she didn’t absolutely no campaigning on the feeds which Brent thought was the complete right decision. Rob thought it was a bit of a missed opportunity to get Jackie out because in previous big brother she would have been the prime target.

Rob does not think that Becky and Shelli are the most interesting houseguests to win HoH but Rob feels that them being HoH will be interesting and unpredictable. Rob thinks that their HoH rain will provide them with a story which otherwise would not be there.

Rob and Ian speculate if there will be a backdoor plan in motion to get Audrey out. Ian also suggests that if someone is paired with Audrey during the BoB they would throw the competition. Brent and Ian complete dismiss the idea that Audrey will quit when the going gets tough.

Ian is happy that both HoH rounds were the same and Ian was happy that the people playing in each round was randomly selected not like the guys/girls HoH competition from last summer.

Rob compares the relationship between Austin and Jace to Max Dawson and Shirin on Survivor. Together Austin and Jace are very annoying and they irritate the other people but apart they can be good players.

Brent does not think that Shelli will back door Audrey but he thinks that Becky could potentially back door her. Brent thinks that Audrey needs to get to know everyone in the house so they don’t turn her into a villain. Ian points out that Audrey’s experience with Online Reality Games in hurting her in this game because she is just talking strategy and she is not making any personal connections.

Special thanks to Shane Gallagher for this week’s episode recap