Podcast Episode Recap of the Season Premiere of Big Brother 17 from June 24, 2015

Rob Cesternino is joined by longtime friend of the podcast, Matt Hoffman to discuss the premiere of Big Brother 17 on June 24, 2015.

Rob and Matt begin by parsing through all the new information we learned about Big Brother 2015 which included 3 big announcements.

1.  There will be a fan favorite back this season… and it’s The Battle of The Block?

Potentially the biggest head scratcher of the night, it was both curious that the show brought back “The Battle of The Block” and labeled it as a fan favorite. Rob and Matt were both very surprised to see it back after the tepid response seen by many of the Big Brother fans on twitter.

This was a twist that we knew about where people will be coming in to the house to “takeover” and announce new twists each week.  Depending on how the twists play out, this could either save or hurt the season at any point this summer.  There’s really no way to tell right now how it’s all going to play out.

Among the other notable headlines from the first night in the house, we saw Audrey announce that she was Big Brother’s first ever Transgender player.  James became the first HoH of the season after winning a photo finish in the HoH competition as well.  In addition, we got to meet the first 8 houseguests with the rest of the players moving in to the house on tomorrow night’s show. 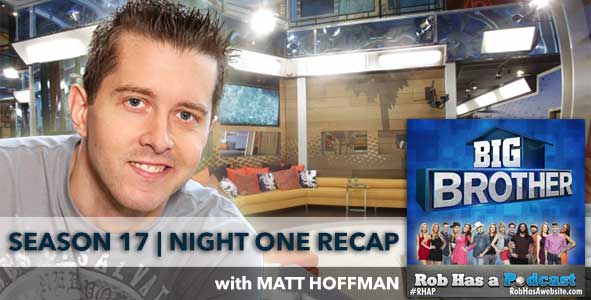