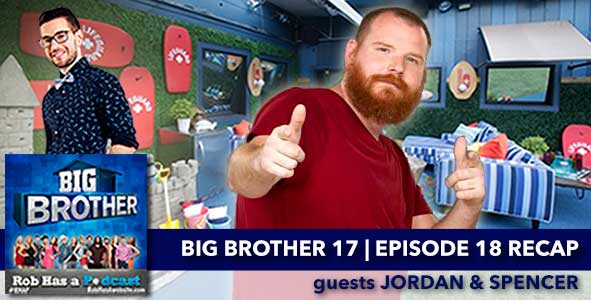 Jordan Parhar fills in for Rob for this episode of the podcast. He is joined by Spencer Clawson and Taran to discuss James’s HoH and nominations on August 2, 2015.

Jordan starts off discussion by saying that James is not afraid to get blood on his hands this week. After his first HoH, he sort of went to sleep, but his move to nominate Clay and Shelli may really endear America to him. Taran agrees, saying that the audience and live feeders will love him, but he is handling his HoH week poorly. He is not getting enough information out of people and doesn’t realize how much control Vanessa has in the game. Spencer thinks he is doing fine, because he is breaking up the Sixth Sense alliance.

Jordan mentions that when James won the HoH competition, the Sixth Sense members went into self-preservation mode, everyone throwing each other under the bus. Shelli only asked for safety for herself and Clay toward the end of the competition, which made Vanessa concerned. Spencer thinks that Shelli should’ve just tried to win, or at least made a deal for herself only and not include Clay. He comments that Vanessa gets too worked up about things and needs to relax. Jordan says that it was a good idea for Shelli to make a deal with James if she thought she wouldn’t win.

Spencer says that he liked the deal Vanessa ended up making with James. Vanessa would not put up James and one other person of his choice until top seven if he keeps her safe. Jordan says that Vanessa handled getting Jason out really well. It was her own move, but she managed to shift blame to Clay and Shelli since they lied about it. Spencer says that he thinks Johnny Mac is playing the best game, as he doesn’t need to win competitions to be safe. Vanessa has to show that she can play the game well when she is not in power. Taran says that Vanessa figured out that, if
Battle of the Block would’ve remained, there was a 95% chance that at least one of the HoH’s would have been someone other than Meg, James, or Jackie. Therefore, one of them would probably have gone home. They agree that it would have benefited Vanessa for BoB to stay in place.

Jordan brings up that Julia replaced Jace on the memory wall following the HoH competition. Spencer, Taran, and Jordan are mad that Jace is no longer on the memory wall, but are glad that he is at least still in the show introduction. Jordan shifts the conversation to Austin and the twins. He says that Liz attempted to make Julia feel better about Austin. Julia was angry with him for everything that he told Jason last week, and she still does not trust him. Spencer says that the house should get out Liz, since she has tight relations with Julia and Austin, and she ties
those two together. He thinks that Julia is the better game player. He says that Austin will not handle having both twins in the house very well.

Taran reports on the live feeds. James won Power of Veto, and plans to keep nominations the same. He wants Shelli evicted, but Clay is campaigning to people to vote him out and save Shelli. Taran thinks Becky has Vanessa figured out. Becky is trying to play both sides, so she knows that everyone trusts Vanessa. Becky is not playing both alliances very well, since she is too adamant in what she says to them, whereas Vanessa has ways to wiggle her way out of things that she says. Taran says that some people that watch feeds are comparing Becky to Andy, using the “rat floater” strategy.

The PoV had rewards and punishments. Shelli had to do 2,400 sword routines, or she was not allowed to play in the following veto. Jackie has to wear a suit of armor, and Vanessa has to polish the armor for 24 hours. Vanessa was originally going to try and get Becky nominated as a replacement and expose that she is playing both sides, but she was hindered by being attached to Jackie. Spencer and Jordan comment that Shelli should not have done the task. If she cannot play in next week’s veto, she is less of a threat.

Taran continues to say that Clay and Shelli tried to throw Austin and the twins under the bus to James. Now they are trying to get Steve nominated. They refused to say anything bad about Vanessa or Becky, which are the two people that it may have worked with. James, Meg, and Jackie want Clay to stay because they might be able to work with them. However, Taran thinks that Shelli will probably stay this week. Jordan says that Clay and Shelli are on their high horse in the sense that they expect others to play by their moral rules. Taran says that on one hand they feel screwed over, but they sometimes realize that it is their own fault too.

Spencer and Jordan comment that James is making good TV this week in getting blood on his hands, but it is not a great strategic move. It could make for a good point in a final two speech, but it is bad for game longevity. Taran says that Jackie and Meg are probably the only people that would keep James safe next week.

Special thanks to Luke Adams for the recap.