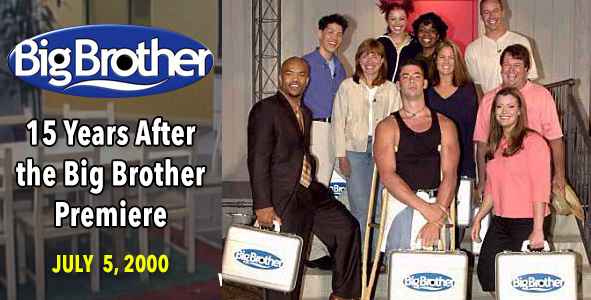 Rob Cesternino and Eric Stein celebrate the 15th year anniversary of Big Brother in the US by going back to watch the first US Episode of Big Brother.  The show premiered on Wednesday night, July 5th, 2000 following the 6th episode of the original Survivor.

In the premiere episode, Julie Chen explains how all of Big Brother is going to work – which barely resembles the game that we currently see.  This season would feature 10 players, who were transported to the house in white SUVs during the episode.  They would live in the house for the summer and America would select which of the houseguests would be banished.

In addition to the format changes, Julie had a co-host on the show named Ian O’Malley.  O’Malley gave a multi-part tour of the house and showed us the features of every room in the house.  The first Big Brother house is remarkably unimpressive and this tour really highlights a very boring house for what will be considered to be a very boring season of Big Brother.

Despite being considered somewhat of a failed venture in it’s original incarnation, Rob and Eric discuss how Big Brother was able to rebound and go on to produce 16 more seasons (and counting).  While not a ratings winner, a critical darling or a show with mainstream appeal – the show was quite lucrative for CBS which caused it to be renewed for it’s second season.  In that second season, under the direction of Arnold Shapiro (and his pupil, Allison Grodner) the show radically changed the format – eliminating America as the mechanism for deciding who stays in the house.  Most of all, Shapiro caught lightning in a bottle as Dr. Will Kirby became the star of the show and ultimately changed Big Brother to become known as a strategic competition.