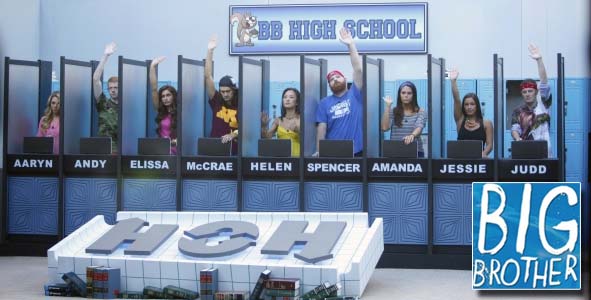 The guys discuss the feud between Candince and GinaMarie from the live show, whether or not Andy should have won HoH and whether Helen may have made a bad move in telling Andy it’s time to take out Amanda.

Rob tells us how tonight’s show gave us extended looks at that happened behind the scenes on Thursday. Brian has lost all respect for GinaMarie when she didn’t allow Candice to finish her speech, pointing out that Candice let GM make her nomination speech.  Making negative comments about Candice being adopted was the final straw (“Nobody wants you. Not even your mother”) .  Eric also has no respect for GM, insisting that she is a poor representative of Long Island New York.

Rob asks what is Nick thinking. Eric says run hand hide.  There is also a girl that has been in photos online with Nick.  Eric saw these photos and retweeted them, warning the girl to run and hide because GM is coming.

Eric and Rob were surprised by the Thursday eviction of Judd.  Brian had suspected it because of the comments from the live feeds during and after a practice game that gave the house guests a hint that there would be a double eviction.

Rob describes tonight’s HOH competition involving cherries, bananas and whipped cream. Eric feels that tonight was the first time they have retreaded a competition. Eric has enjoyed all the new competitions this year and felt let down tonight.  Rob brings up that McCrae did not just through the competition to Amanda, upsetting Amanda, but Brian feels it was a good move to show the house that he is not totally attached to Amanda.  Eric doesn’t know why Amanda gets upset every time McCrae makes a good game more and feels she has nothing to worry about because, no matter who is HOH, she seems to take over the HOH room and have whom ever she wants nominated for the week. Rob thinks it was a bad idea for McCrae to win because he would want Amanda to seem like more of a target than himself.  Eric asks who wants Amanda our before McCrae? He feels people want Amanda in the house to be the target so they will want to keep her longer than McCrae. Brian, going off of what he has heard on the live feeds, believes that there are a number of people who want Amanda off before McCrae

Rob tries to compare Amanda crying about not winning to Rachel crying a few seasons back. Eric feels they are not comparable at all.  Brian compares Amanda crying to Gary from Big Brother Canada.

Rob wans to know if it was a bad idea for Andy to take the power in the house. Brian believes he will do what everyone else has done this season and just day he is doing what the house wants in the nominations. Overall, Brian feels it was a bad because no one was after him and he can not play for HOH next week. Eric believes it will turn bad and that he was playing a great floater game, voting out someone in the other alliance and remaining everyone’s friend. Eric believes Andy will go a long way if he gets rid  of Elissa, Helen, Amanda or McCrae and latches onto the left over partner.

Rob asks if Andy wanted to target Jessie or is he doing what Amanda wants? Brian explains that he wanted Jessie out all along and if she wins veto, GM would have to go up and out. Rob wants to know why anyone cares about Jessie and Brian suggest it might be because she was so close to Judd. Overall, Jessie is an easy target to remain friends with everyone in the house.

Rob moves onto Helen and feels that her pep talk to Amanda was great. Eric feels it was super annoying. The bad move, in Rob’s eyes, to go to Andy and suggest putting up McCrae and Amanda. Eric believes it is a good move, but feels she should win an HOH and nominate them herself.

Gametime Fitness:  Rob, why do you think no one can see through Helen’s overly transparent gameplay?  Is it because they are stupid or is Helen good?

Rob wants to know if maybe the answer is all of the above. Eric thinks Helen is a good player but in another season, she would have already been voted out. Rob feels she has people convinced that she is genuine in her cheerleading.Eric feels she only uses it on the people who are more open to buying into it. Rob asks Brian is it compares to misting. Brian compares it to spraying but his effective in what she does.

Rob feels that is a cold war going on between two power players in the house, Amanda and Helen. Eric suggests there are to power pairs, Helen/Elissa and Amanda/McCrae, with Andy floating back and forth. Looking at the other four house guests, Brian places Jessie on the Helen/Elissa side and Spencer on the Amanda/McCrae side (mostly McCrae because, as Eric points out, he is concerned about a girl alliance). Spencer has recently stated that he would put up Helen.  Brian puts GM on whatever side Aaryn goes with. Aaryn has stated that she trusts Helen the most in this game now.  Rob points out that it has been quite the change compared to three weeks ago. Now the game is pivoting around her. Eric feels Aaryn is final 2 material because she has no chance in winning.  Rob has to say that she is now playing great. Eric says he has to vomit when he says it.

Rob asks that, if Aaryn is not final two, is there a chance that Aaryn has a shot to be America’s Favorite? Eric says no way and suggests Elissa or Judd or Candice.  rob points out that Elissa may be in the final two and not eligible. He also believes that America will not remember Judd and Candice in a month and a bit.  Eric believes there is no chance. Rob just feels Aaryn is playing a much more positive game.

Rob asks which side of the house will Aaryn goes to when things begin to heat up. Eric thinks she will go to Amanda and McCrae. Brian believes it depends on who gets targeted.  Eric would like to see things heat up but every week the house has just been following along, mostly with what Amanda wants. The plan seems to be to take up Spencer then GM. However, Spencer has talked with Andy, McCrae and Amanda about going after Helen next week.

Brian brings s up to date and lets us know that Andy won the POV and wants the nominations to remain so that Jessie will go home. Rob wants to know if it will be a 6-0 vote. Brian believes it will be, even if the target moves off of Jessie.  Eric believes that the veto will be used and either Helen will convince Andy to put up Amanda or McCrae or Amanda/McCrae will convince Andy to put up Helen.

Eric thinks there is a really good chance that there will be a chance in the nominations. Eric puts it at 80%. Brian feels there is only a 20% chance. (The editor of this recap really likes many of @RealityRecaps points but is on team @LynchMGM for this one. Andy’s game doesn’t show any sign of boldness).

Rob then transitions to the pharmaceuticals the house guests are on and our pundits discuss who is on what and how they obtain these drugs.

After we welcome back Jessica Frey and celebrate her new apartment, we begin to answer YOUR questions.

Tyler – This is about the same time that Ian won HOH for the first time and he took over the game. Are there similarities between Ian and Andy?

Brian strongly states no. Eric also says no. Rob suggests that Ian was kind of working both sides. Eric feels we knew where Ian’s allegiances were while we do not know which way Andy will go.

annaxbananax0:  Was nick’s eviction the defining moment or peak of this season? As early as it was, it seems that that set the tone for the rest of the season and everything from that point has been pretty static.

Rob and Brian do not feel this is true. They both feel recent events in the double eviction have been the most pivotal.  Eric interjects, unless we are talking about comedic value.

Sharon Pierpont: If they give Andy a pep talk, he may just do it… he tends to bend to peer pressure.

Matt Racine @MattRacine – Racist tendencies aside, am I the only one who’s starting to root for Aaryn?

Eric doesn’t want to go there at all. Rob proclaims we have one vote for Aaryn as America’s Favorite!

Rob suggests Andy is on the same path as Andrew from Big Brother Canada.  Eric reiterates that Andy needs to get rid of a power player then connect with their partner and should do it this week.  Brian feels he may need to win the final HOH to take himself to the final two.  Rob suggests a need for Andy to take out two power players to make it to the end. Eric feels that he may then have so much blood on his hands that he will no longer be the carefree Andy that everyone loves (editor’s note, think of the evolution of Walter White). Rob pressures Eric to pick a person that Andy will go after. When pressed, Eric picks Helen.

Candace A: Who do you think Andy has a chance of really winning against?

Rob believes, right now, anybody.  Eric feels he can’t currently beat Amanda or McCrae. Rob feels Big Brother juries vote for the person they like the most. Eric points our that Judd is in the jury and is going to turn against Helen and Elissa as people walk in the jury house. Eric feels Amanda and McCrae can argue that they controlled the house. Rob doesn’t feel this argument has been successful with Big Brother juries. Brian agrees that houseguests do vote more personally. Eric points out that at people in the jury house will start sharing how Andy played people and he will loose his polish.

ddgypsy:  Who is the best bet on the lock against Amanda to get Amanda out?  Who is most likely to take that shot?

Rob asks who Helen would put up against Amanda. Brian believes it would be McCrae. Eric believes that McCrae is going home before Amanda but if |Helen puts up Amanda, that blows his theory that Helen is going to keep Amanda to be her shield, so he agrees with Brian.

annaxbananaz0: If you could bring back one of the evicted houseguests, who do you think would bring the most gameplay?

Rob would say it would be the most fun to bring Nick back but from the jury, maybe Judd. Brian would go for Judd, as well.