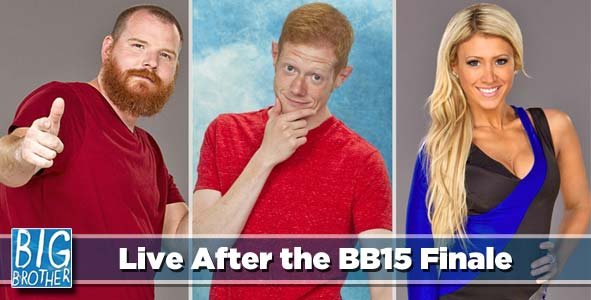 Big Brother has a new champion, and on the season finale of Big Brother Brainiacs, Rob Cesternino and Brian Lynch are back to break down one last night of scheming and strategy in the Big Brother house!

Andy Herren is the winner of Big Brother 15, defeating GinaMarie Zimmerman by a 7-2 vote. Rob asks Brian if the right person won, and based on the landslide vote, Brian is fairly confident that the right person did win. Both Brainiacs think that Andy played the best game and thought that Andy’s handling of the jury questions, which they feel is one of the best ever on Big Brother, only looked better compared to GinaMarie (who…didn’t give one of the best jury performances ever).

While Rob doesn’t want to take anything away from Andy as the winner, considering him to be a top 10 Big Brother player of all time, he felt this was a very anticlimactic outcome. Helen telling Julie before Spencer even came out that voting out Andy was the only smart move for GinaMarie and Spencer sort of gave away early in the night that no one was going to beat Andy in a jury vote. Because Andy doesn’t really make the best television, Rob also thinks that it is unlikely he will ever play again. Brian thinks he could return for some sort of half veteran, half newbie season, but both think that a better showing from Andy in the Diary Room would have made him a more interesting contestant and made for a more fun season. While an entertaining player like Dan Gheesling will lay out their plan in the Diary Room (Dan’s Funeral, Replacement Nominee Roulette, etc.), Andy spent most of his confessionals worrying that his plans might not work. Brian points out that being a storyteller in the Diary Room proves to the audience that you’re accomplishing things, and this might be why so many people are not fans of Andy’s gameplay.

Rob and Brian then moved on to discussing tonight’s jury roundtable, which was moderated by Big Brother 2 winner Dr. Will Kirby. Rob loves Dr. Will and was thrilled to see him return to the show, but by the tone and format of the segment, Rob was left wondering if he was watching Dr. Will or Dr. Phil. Both he and Brian were slightly confused by the decision to use Will as a sort of mediator for the jury to hash out their issues with the final three contestants and with each other. Many people on the Internet speculated that CBS might have brought Will in to confront them for their behavior in the house or push for less personal voting. Brian did however appreciate Will’s point that “not getting blood on your hands” is a viable Big Brother strategy that can often be underappreciated. Rob points out that the roundtable spoke volumes about how the jury perceived Spencer, considering no one was really taking about him until Will had to specifically ask them to weigh his pros and cons. While there was some allusion to Spencer playing a good game because he survived eviction so many weeks, neither Rob nor Brian feel it is fair to compare him to Dr. Will’s strategy of ensuring his housemates that he could always be evicted later. Spencer was consistently the pawn and never in any danger of leaving the house, while every week Will had to pull his puppet strings in order to turn the vote in his favor.

Rob usually really enjoys the finale segment where all of the houseguests from the season are reunited, but he and Brian both thought this was the worst pre-jury segment the show has ever done. Rob hated that only two of the five pre-jurors were asked a question, and didn’t really understand why Jeremy and Howard were the ones who got to speak. Julie asked Howard about the racism controversy, but she had to nudge him into really bringing the subject up only so they could gloss over it. Rob was also completely baffled by the idea that Julie Chen, a professional journalist who has hosted Big Brother for 15 seasons, didn’t ask one question at the finale about GinaMarie and Nick’s relationship, easily one of the most buzzed about subjects all summer. He and Brian speculated that there was a possibility that Nick asked for it not to be brought up publicly on the show, so the producers punished him in a sense by not letting him speak on air. On the plus side though, Brian did like being able to see the jurors’ faces fall when Julie called Big Brother 15 the most controversial season ever.

There’s been a lot of discussion online about whether or not this has been the worst season of Big Brother ever. Rob asks Brian if he feels this way, but Brian doesn’t really dislike any of the seasons. He thinks season 15 is one of the better seasons of the show as a social experiment, but is probably one of the harder seasons to watch because of how ugly things got. Brian mentions that season 9 is a common choice for worst ever, but even he liked that one. He and Rob point out that Dan made the end of the game so memorable last year that it was always going to be hard for the end of this season to live up to that. Rob believes that the biggest lesson the producers of Big Brother will take away from this summer is that the longer a season lasts, the less entertaining the end of the game will be.

To close out another season of Big Brother podcasting, Rob and Brian take some viewer questions. The Brainiacs take one final pulse of the McCranda relationship, speculate as to which houseguest is most likely to get arrested tonight, and wonder if anything in this finale supports recent rumors that Allison Grodner will not be running the show next season.

Have a question for any of the Big Brother final 3? Go to the Rob Has a Podcast subreddit at reddit.com/r/rhap (or just go right to robhasawebsite.com/reddit) to submit your questions for Andy, GinaMarie, and Spencer!

Be sure to tune in tomorrow at 12pm Eastern/9am Pacific for the premiere of Survivor Know It Alls with Stephen Fishbach!