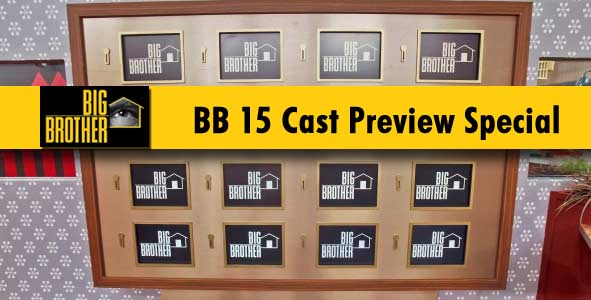 Cast Members (Time Codes are for the audio version):

(Special Thanks to Brendan Noel)

Kaitlin’s strategy is to “stay strong and focused” but she says she will be fairly closed off – do Rob and Brian think her “Minnesota nice” strategy will take her far, or have her gone before jury?

Spencer says he’s “mouthy, opinionated, and chill,” which Brian thinks might conflict. Rob examines the “glass half full” and the “glass half empty” angles for how Spencer’s game could go. Brian and Rob also discuss how Spencer’s plan for a four-man Brigade-type alliance could pan out in a 100-day season.

Rob can’t really understand what Judd was saying in his interview, but he has an interesting theory as to who might be the famous father of “Party Daugherty”. One of Judd’s characteristics has Brian concerned with how far this self-proclaimed fan will go.

Rob is not too impressed with the men this season, which includes the Spicoli-esque David. His laid-back strategy looks good to Rob on paper, but will David’s showering habits be his own downfall?

Andy went over well with both Big Jeff and Rob, and Brian predicts good things from Andy in the Diary Room – could he continue the trend of red-haired reality show contestants being underestimated?

At 37, Helen is the “old lady” in the house. She’s also the only married houseguest this season, leading Rob to believe there will be a lot of hooking up this summer. Rob and Brian agree on how Helen will fare this season, and it’s all because of her job as a political consultant.

Jessie is single and looking for love. Big Jeff might even say she’s ready to mingle. Rob and Brian are a bit confused over how big a fan Jessie actually is (she claims she’s a super fan), which has them wavering over how she might do in the game. Plus, find out which younger past houseguest Jessie is a cougar on the prowl for.

Rob and Brian are a little bit at odds over Jeremy’s supposedly secret strategy. Will he surprise the viewers, or confirm their first impressions?

Brian has a theory as to why McCrae might have been a last minute replacement in the cast. Does Rob think this pizza boy will deliver the goods on Big Brother 15?

Howard might have the most intense memory wall picture in Big Brother history, and Rob and Brian worry his imposing physique will be just as threatening as his picture. Does the arrow point up or down for Howard? Plus, Howard also has a hidden talent that Rob hopes comes out on the show.

Rachel Reilly’s sister is in the Big Brother house, but Elissa is married so there won’t be a Brendon to get between her and her man. How much do Rob and Brian think Elissa is like her infamous sister?

With a memory wall picture taken sometime in the 1990s, Candice doesn’t make a great first impression with Rob. Thankfully, he and Brian have nice things to say about her background and her planned strategy. Candice recently found out she was adopted – could her birth mother be one of her housemates?! (Probably not.)

Rob believes Nick is the most annoying person to ever set foot in the Big Brother house, comparing him to a reality star we met last summer. But could an eleventh hour revelation cause Rob to change his mind about Nick?

Rob liked Gina Marie’s picture, but that might be where he draws with the line with this loud New York native. She was one of two houseguests that stuck out for Brian – but not in a good way. Also, Rob believes a curse in the Big Brother house will have Gina Marie back enjoying the Brooklyn sunshine in no time.

A fellow Long Islander, Amanda seems to have a solid strategy. Do Brian and Rob think a big personality will keep her from “going all the way”?

After discussing all 16 houseguests, Rob and Brian predict which houseguest is single and ready to mingle with the half million-dollar prize.

RobHasAwebsite.com/LiveFeeds – Save 20% on a Live Feed subscription and earn a chance to win $250 playing Live Feed BBingo