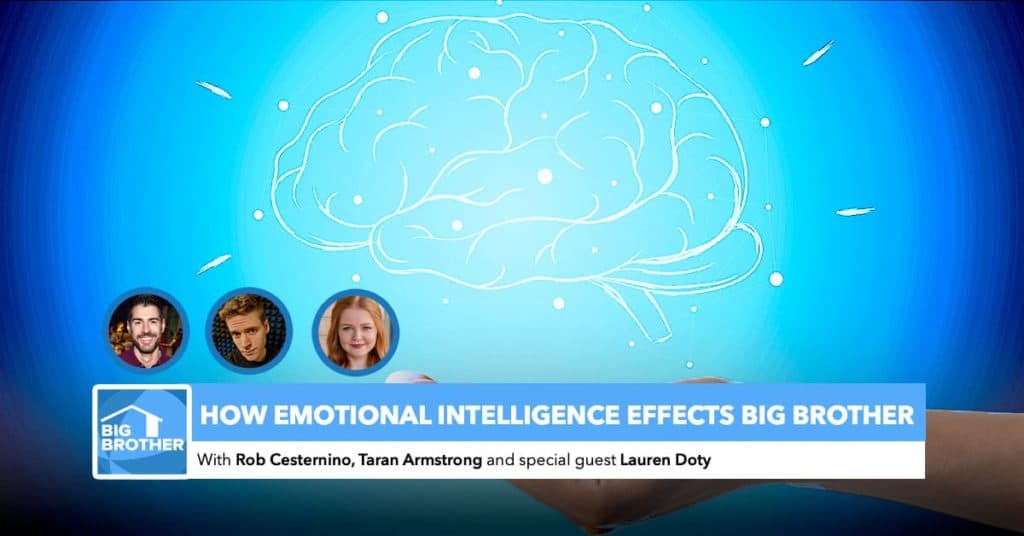 Have you ever wondered how emotional intelligence (EQ) plays a role in the Big Brother house? It goes without saying that placing a big group of diverse individuals into one house is bound to create chaos – especially with the added elements of competitions, strategy, vetos, and evictions. Along with avoiding eviction, one of the most challenging aspects of Big Brother is simply getting along with the other Houseguests.

In today’s podcast, Rob Cesternino and Taran Armstrong, speak with Lauren Doty (@lauren_dots), an EQ expert, to discover how emotional intelligence effects Big Brother. They explain how having a high EQ can benefit a player’s social game and their ability to work with others.

What is Emotional Intelligence?

According to HelpGuide, “Emotional intelligence (otherwise known as emotional quotient or EQ) is the ability to understand, use, and manage your own emotions in positive ways to relieve stress, communicate effectively, empathize with others, overcome challenges and defuse conflict.” The four major aspects of EQ are self-management, self-awareness, social awareness and relationship management.

Which Big Brother All-Stars have been playing with the most self-awareness? Who do you think has the highest EQ given the gameplay and Live Feeds we’ve seen? Share your thoughts with us on Twitter by tagging @RobHasAPodcast and using the hashtags #RHAP and #BBEQ!