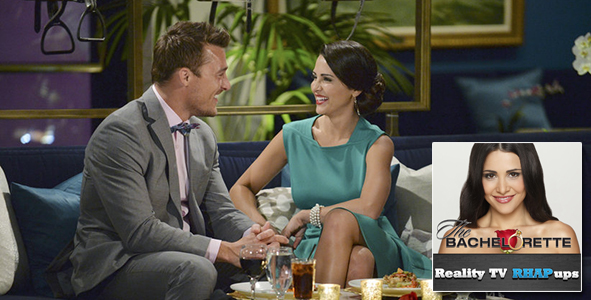 In this RHAP-Up podcast, Amy (@RHAPRecapper) and Haley (@hstrong_) share their reactions from episode 2 of the Bachelorette.

Haley and Amy break down Andi’s first dates with the guys in the second episode of The Bachelorette. Amy points out that the guys, specifically Brett, do not seem to be all that excited when Chris Harrison drops the W-word (“wife”). But all the guys hope to get the coveted one-on-one dates with Andi, and Eric gets the first date with Andi. Haley and Amy talk about how hard it was to watch Eric Hill’s date, as he was the contestant who passed away in a tragic accident after filming. However, at the same time they found the date fun to watch and it really showcased what a great person Eric was. The date included a helicopter, a “Bachelor” staple, that took them from building sandcastles at the beach to snowboarding and sledding at the top of Bear Mountain. After the winter activities, Eric shared with Andi stories of his travels, including a dangerous trip to Syria, as well as his hopes to find love and start a family. For more information about Eric’s legacy, go to www.livelikeeric.com.

Next they cover the group date, in which the guys had to divide into groups and strip for Andi. There was a group of cowboys, army men, and firemen, as well as 2 solo acts: Marcus as the aviator and Nick S as the robot. The other guys on the group date were: Brian, Marquel, Bradley, Craig, Brett, Cody, Tasos, Josh, Ron, and Dylan. Haley and Amy share their thoughts on male stripping as an art form and date activity, and rank the different stripper costumes. Haley found Marcus to be the standout of the male revue, and it seemed Andi did as well. However, Brian also got some positive reactions from Andi, as well as Kelly and Sharleen who joined Andi to critique the guys. Craig and Cody seemed the most excited for the date, although Josh seemed to be experienced as well. They then talk about Craig’s drunken antics during the cocktail party after the strip show for charity. Craig’s overindulgence on the date led him to shove Patrick, jump in the pool with Nick S, and eventually be removed by producers.

Then Amy shares highlights she noticed from checking out the guys’ packages… on abc.com. Ten of the guys have introductory video packages. You can learn more about Josh M, Nick S, Craig, Andrew, JJ, Eric, Chris, Dylan, JJ, Marquel and Tasos here. Some of the standouts were the Marquel video highlighting his deep love of cookies, JJ explaining the pantsapreneur business, Dylan discussing some family tragedies, and Josh M talking about baseball. However, Amy has a new appreciation for Tasos after seeing his video singing to his dog and teaching Spanish to little kids and dubs him her official crush for the season. Even though Marcus did not get a video package on the website, Haley is locked in on the Canadian heartthrob for her season crush. Amy also mentions some deleted scenes, including that Andi’s dad surprised her at the mansion on night one and talked to the guys.

Chris gets the remaining group date, meaning that JJ, Andrew, and Nick V were dateless this week. Haley really loved how stylish both Andi and Chris were on their date at the Santa Anita horsetrack. They talked to an older couple who had been married 55 years, which both Amy and Haley thought was staged. However, Andi and Chris found it very sweet and it led Chris to open up about his past engagement. Chris also got the first kiss of the season during the surprise concert, another staple of the “Bachelor” franchise. Amy wonders if Chris the farmer isn’t too quiet for Andi, but Haley is sure he will be around for hometowns at the very least. Chris’s series of smooches on the 1-on-1 led Rob to pull ahead to a commanding lead in the draft, with 19 points to Haley’s 11 and Amy’s 9.

They RHAP up by talking about the rose ceremony cocktail party. Both thought Nick V’s date card to invite Andi to have champagne and strawberries with him was adorable. They were not as positive about Marquel’s shirt and tie combination or Brett’s sock puppetry. The three guys eliminated were tax accountant Craig (in spite of singing an apology song to Andi), pro-golfer Nick S (who had a funny exit shown in the closing credits in his robot costume), and firefighter Carl (who apparently didn’t even impress Andi as a stripping fireman). They also compare the shoe sizes of the men eliminated to continue to analyze how it affects Andi’s choices. They answer the questions that came in on Twitter and Facebook and share some of the funny tweets they found during the episode from past contestants and fans.

Amy and Haley will be back next week to discuss Sunday and Monday’s two-night event. Be sure to subscribe on iTunes: robhasawebsite.com/BACHpodcast and keep up with Amy (@RHAPRecapper) and Haley (@hstrong_) on Twitter.