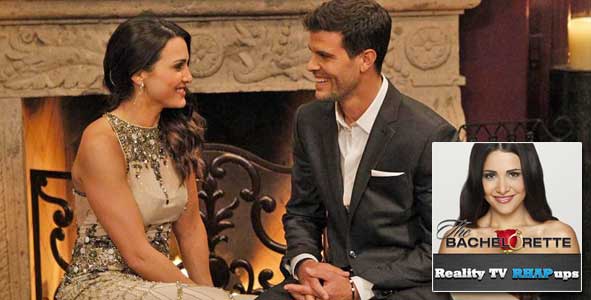 In this episode of The Bachelorette RHAP-Up podcast, Amy (@RHAPRecapper) and Haley (@hstrong_) share their reactions from Bachelorette premiere night. Both Amy and Haley thought the season got off to a great start and think Andi Dorfman will be a fun and engaging bachelorette to follow.

They discuss the changes they noticed in this premiere compared to past premieres. It was shorter (90 minutes) and seemed to have a different tone. This year, we didn’t get to see video packages of the guys in their hometowns. They also talk about how the episode opened with a tribute to Eric Hill, the contestant who passed away. While it was a sad way to start out the show, Amy and Haley thought it was good that the show shared that information up front with viewers.
There wasn’t much to discuss from Andi’s segment so Haley and Amy quickly dive in to their discussion of the 25 men competing for Andi’s affections, starting with the limo arrivals. Haley talks about the men that impressed her the most aesthetically– primarily Marcus, so she was feeling good about her first round pick of the draft. Amy was not so stoked about her first choice of Steven, who didn’t leave much of an impression on Andi or the audience and was sent home. Rob’s first round pick of Andrew fared pretty well during the cocktail party, as he hit it off immediately with Patrick due to their shared love of formula one and fine clothing. Amy and Haley are excited to watch this bromance blossom during the season.
Amy and Haley thought that Tasos and Nick S did well with their entrances. They were both shocked that Cody, who arrived pushing a limo, made it through the first night. They also talk about some of the limo entrances that fell flat. While there wasn’t anything too crazy this year, a few guys stood out in a negative way. Brett brought Andi a lamp from the hotel, and Jason the doctor told a lame joke about Andi having a fever because “she’s so hot.”
In their discussion of the cocktail party conversations, both Haley and Amy agree that Marquel had the best strategy by bringing cookies. He even dropped a “Seinfeld” reference in telling Andi to “Look to the black and white cookie.” Amy was feeling happy about her selection of Nick V on her team, as he wound up with the first impression rose. Haley was also impressed with the farmer, Chris, who seemed to have a good connection with Andi. They also discuss the baseball player Josh M, who has the advantage of also being from Atlanta, and who Andi said was exactly her type.
It wouldn’t be a season of The Bachelorette without drama, and the drama of the premiere night was caused by a “party crasher” who turned out to be Chris Bukowski from Emily’s season of The Bachelorette and Bachelor Pad. He was known as “Creepy Chris” by Rob and Nicole, and Andi must have felt the same way, as she didn’t invite him to join the party. Amy and Haley thought it was a really odd part of the show but were glad and not surprised that Andi did not choose to extend his 15 minutes of fame.
They then take a look at the 6 men who Andi eliminated: Emil, Rudie, Jason, Mike, Steven, and Josh B. They discuss Josh B’s meltdown, Emil’s “anal” introduction, and Rudie’s crazy eyes. They then examine the important question: Was shoe size a factor for these first-night boots?
They RHAP-up by taking some listener questions and sharing some of the funny tweets from viewers and former contestants during the premiere, and making a couple of predictions about some of the things that may happen based on the dramatic preview of what’s coming up for the rest of the season.
As there weren’t any make outs on night one, the current draft standings reflect points for getting a rose to move on to the next week.
Rob (7 points)
Andrew, JJ, Chris, Dylan, Brian, Bradley, Craig
[5th round pick Jason sent home]
Haley (6 points)
Marcus, Ron, Patrick, Josh M, Nick S, Cody
[3rd pick Rudie and 7th pick Emil sent home]
Amy (5 points)
Carl, Nick V, Marquel, Brett, Tasos
[1st pick Steven, 6th pick Mike, and 7th pick Josh B sent home]