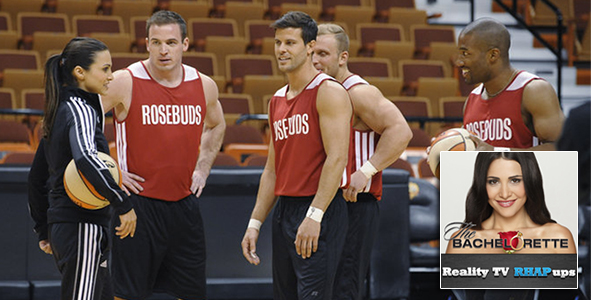 In this RHAP-Up podcast, Amy (@RHAPRecapper) and Haley (@hstrong_) share their reactions from episodes 3 & 4 of the Bachelorette.

In this episode of The Bachelorette RHAP-up, Amy (@RHAPRecapper) and Haley (@hstrong_) recap all the drama of the special 2-night event (episodes 3 and 4).

They jump into talking about Episode 3, which started with Nick’s one-on-one date in Santa Barbara. Both thought that this was a very normal date and found Nick’s skepticism refreshing. Amy and Haley are excited to discuss the group date, which brought in Boyz II Men to attempt to coach the guys into being balladeers. Amy related to a lot of the guys in the episode who said Boyz II Men defined their middle school experience, but she couldn’t compete with Eric who confessed “I’m pretty sure I touched my first butt to I’ll Make Love to You in 7th Grade.” Amy loved seeing Eric’s sense of humor come through in the confessionals in these episodes. Even Haley had to agree with Eric’s assessment that Marcus’s voice sounded like “chickens being strangled.” They agree that really only Bradley and Tasos had good singing voices, but it was amusing to watch the audience’s reactions. However both agree that Bradley took the date way too seriously and seemed to think he was on a talent show, not a dating show. Haley thought Andi wanted to escape with Boyz II Men rather than suffer through their serenade. Later on in the group date, both Marcus and Josh kissed Andi, but Amy and Haley were not  fans of Marcus’s move of announcing that he wanted to kiss her before doing so.

They also discuss how Ron received news that a close friend had passed away so he left the show during this episode. Dylan also shared with Chris that he wanted to get one-on-one time with Andi to be able to talk about his family tragedies.

JJ gets the next one-on-one date with Andi, where they both are put into special makeup to look like they are 80 years old and then walk about Santa Barbara trying to pose as old people. Amy thought the date was silly and fun, while Haley was creeped out watching it. Both agree that JJ seems very fun and brings a nice dynamic to the relationship with Andi, who stated she’s never dated someone as fun as JJ before. JJ has a heart-to-heart with Andi about being quirky and wanting to find someone who accepts his dorkiness. Amy thought it was a little too rambly and focused on himself. JJ got a few kisses on this date; they were all “grandpa kisses”, but they still helped boost Rob’s score even higher in the draft.

At the cocktail party, Nick V. has flowers sent that are delivered while Eric was talking with Andi about wishing they had more time together. Haley and Amy think that was a smart move of Nick, and noticed how positively Andi reacted to his note. They also found it amusing that Eric said he was “cockblocked by flowers.” They also discuss the drama that occurs when JJ and Josh confront Andrew about getting a phone number from the hostess of a restaurant. Haley and Amy agree that Andrew was definitely lying, as he ran off to hide in his room and then had no defense besides “Funny- I don’t remember that.”

Haley was sad to see Brett’s pretty face be eliminated that night, but relieved to see Bradley eliminated. They did not find either of these eliminations surprising, given how little time was shown of them, and there was zero time of Andi talking about either of them.

Next they move on to discussing Episode 4 of the Bachelorette, which ended with even more drama and controversy. It started out with a one-on-one date with Dylan, who finally shared his personal story. However, Haley and Amy didn’t think the train date was conducive to romance. Haley hopes we will see more of a fun side to Dylan coming up. Both agreed that the “special moment” of blowing the train whistle at the end of the date was pretty lame. Where was Flo Rida to serenade them??

On the group date, the guys got schooled in a basketball match against Andi and some WNBA stars. Haley really likes these dates and feels it’s a Bachelorette staple to have a group of guys get schooled by female athletes at least once a season. Then the guys split into two teams (The Rosebuds: Brian, Andrew, Eric, Cody, Marquell, and Nick and Five of Hearts: Chris, Josh, Tasos, Patrick, and JJ) to compete for extra time with Andi. The Rosebuds win and Haley and Amy laugh about the extended disappointed losers scene, culminating with Josh looking forlorn in the empty arena. Haley also thought it was lame to have almost all of the dates take place inside of (or outside the windows of) the Mohegan Sun casino. On this date, Eric shares with Andi how he abandoned his Mormon religion but is still very close with his family, and Coach Brian shoots a half-court shot in the arena. Brian’s basket really impressed Andi, but he didn’t seize the moment to go in for the kiss.

Haley is very excited that Marcus got the next one-on-one date, but she is much less enthused about the elements of that date: rappelling down the side of the casino and then dancing on a raised platform during a Jon Pardi (not to be confused with BBCAN2 winner Jon Pardy) concert. Haley also admits that Marcus is more bland than she initially thought. Both she and Amy are not fans of how monotone he is, which makes his statements like “I think I’m falling in love with you” all the more odd. Haley thought it was sweet how Marcus tried to comfort Andi with conversation about her mom while they were scaling the building, however.

Next they talk about the “secret admirer” note Andi receives and try to guess who the note is from—possibly Andrew to try to save face, or Josh since he hasn’t had a one-on-one yet. At the cocktail party, we see Tasos ask for one-on-one time, but Brian interrupts them to bring Andi back to half-court, a move that both Haley and Andi really like. Brian’s half-court kisses also bolster Rob’s score in the draft.

Then Eric wants to talk to Andi about their lost connection and raise the issue that he thinks she is the one who is not being open with him, rather than the other way around. He mentions he feels she has a “poker face” and that he didn’t want to date a “TV actress.” These two statements anger Andi immensely, to the point of asking Eric to leave before she blows up further. Both Amy and Haley agree that Andi overreacted. Haley feels that some people are being too hard on Andi with the negative criticism, as everyone overreacts at times and can be triggered emotionally. Amy agrees with a lot of the negative criticism, feeling that Andi should have stepped back and tried to give Eric the benefit of the doubt, rather than leaping to a negative interpretation of what he said. Moreover, she felt that she wanted to hear more from Andi about regretting her statements or seeing where Eric was coming from in his discussion. Both Haley and Amy agree that the show should have shown clips of Eric and mentioned his foundation, rather than keeping the conversation more about the show itself.

Amy felt that the show could have still shown the rose ceremony, even in shortened form, rather than just have Chris tell the viewers that Tasos was eliminated. Amy and Haley were surprised to see Tasos go this early since he had a lot of airtime night 1. Amy worries that she jinxed Tasos by professing her crush on him last week. She wonders if Andi worried about him developing feelings that she didn’t share, so she cut him over some of the guys who seem to just be there for fun, such as Cody and Marquel. Haley reluctantly admitted that Cody was growing on her and she also really gets a kick out of Marquel, especially when he teaches Andi moves such as the “rear naked sleeper hold.”

The draft standings are:

While there’s no Bachelorette episode next week, Haley and Amy plan to do a RHAP-up of the season so far with a special guest next week, so stay tuned!