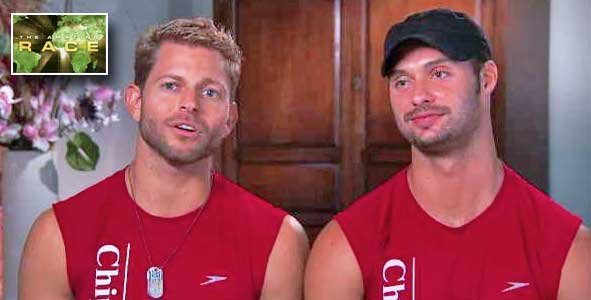 It was a night with plenty of intrigue on The Amazing Race 21. Rob is joined by Amazing Race blogger, Jessica Liese to discuss all of the interesting points from Sunday’s Amazing Race episode.

This week on the Amazing Race, the final five teams picked up where they left off in Moscow. Somehow, all five of the teams ended up on different flights as they headed towards Amsterdam. In Amsterdam, the teams were faced with the dreaded Double U-Turn. Natalie and Nadiya, Trey and Lexi and James and Jaymes decided that they needed to U-Turn Ryan and Abbie if they got to the U-Turn. However, after taking the fast forward, the twinsies didn’t have to U-Turn anybody. The Chippendales ended up U-Turning Ryan and Abbie and then Trey and Lexi U-Turned James and Jaymes so Abbie and Ryan couldn’t U-Turn anybody.

Rob asked Jessica about the precedent for teams doing this sort of thing on the Amazing Race and Jessica says that it hasn’t happened before. Rob wonders if what happened to Abbie and Ryan was a direct result of them not being as cooperative with the other teams as the rest of the teams have generally been. Rob doesn’t understand what the Beekman Boys, Josh and Brent are thinking. They seemed to want to have been U-Turned to stay with Abbie and Ryan. We’re not sure why they are even still racing at this point if they don’t want to win the game.

Later, Rob and Jessica discuss which teams might have what it takes to win the race out of the final four teams left on the show. Plus, we’ll discuss the advantages that James and Jaymes have when it comes to grinding their organs or using a pole on the Amazing Race.