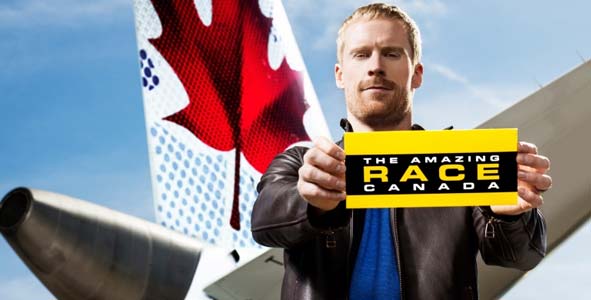 Rob and Jessica discuss the teams as they begin the race and head to the Niagara Butterfly Conservatory for their first task.  The teams find a brand new Chevy which is the product placement of choice for Amazing Race Canada.  Teams must choose one of nine terrariums. The teams that reach their hands in to grosser stuff will get earlier flights.

At the airport the teams start to finally mingle.  The Body Break team is recognized by the Bro team, Jet and Dave.  Rob asks Jessica if “Body Break” will help or hurt Hal and Joanne and Jesica thinks it will help.

The teams fly Air Canada to Kelowna, British Columbia to head to the Blue Bear.  Once there, they will find the Lakefront Water Sports Kiosk to rent a personal water craft.  Jody and Cory hit a locked door which they try to open and sets off the security alarm at the airport. Rob can’t believe how in Canada the police just let them go through the door once it’s open.

Once all the teams all arrive at the Lakefront Water Sports Kiosk, the four teams from the first flight decide to make an alliance. The four teams are: Holly and Brett, Vanessa and Celina, Kristen and Darren and Team Body Break. The four teams agree to make the same deal that was made on the US version of the Amazing Race this past season.

Once the sun comes up, the teams can get their clues to the roadblock which consists of Diving for Ogopogo, the Lochness Monster of Kelowna. Brett is the first player to successfully complete the challenge, even though he feels his might implode. Most of the teams did the scuba diving challenge without incident, but Vanessa found the scuba helmet to be very claustrophobic. As Vanessa continued to panic the rescue team considered saving her, but she was eventually able to complete the task.

After scuba diving, the teams would proceed to Myra-Bellevue Provincial Park to find the next clue up at the top of an abandoned bridge.  Kristen and Darren and Holly and Brent were the first to arrive at the bridge. After both of the women struggled to get their clue, they were able to eventually walk the plank. Tim Sr, despite his parkinson’s disease was able to go out and grab the clue without a problem. Much like her sister, Celina struggled with her leg of the challenge.

Meanwhile, the final three teams still were working on the jetski challenge. Treena and Tenille and the Gay Cowboys could not find the clues. Eventually they saw the roadblock and were able to dive to look for Ogopogo.

In a race for last place the Cowboys and the Twins battled to complete the task on the bridge. Tenille really was afraid of the heights. Pierre was able to get his clue and both teams would head to the winery to get to the pitstop, setting up the inevitable footrace that was foreshadowed in the beginning of the episode.

Tim and Tim Jr. got a half hour penalty for not taking both of the clues. After the penalty, Team Tim only lost one spot in the rankings. Treena and Tenille were the 8th team to arrive and received a 30 minute penalty. The Cowboys were devastated.

Until next time… keep fit and have fun.