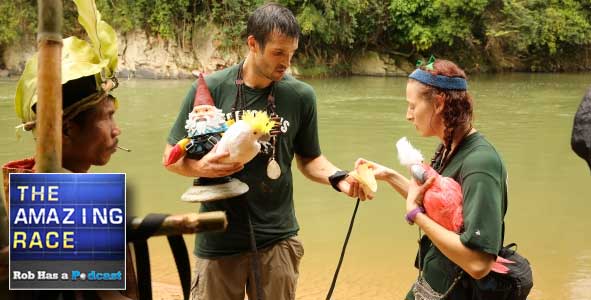 Our Podcast recap of Amazing Race All-Stars Episode 3: Welcome to the Jungle

On this week’s installment of the show, the 9 remaining teams raced through Borneo and ended with Team Youtube aka Joey and Meghan being eliminated.

What Went Wrong for Team Youtube aka Joey and Meghan?

According to Jessica, Team Youtube committed one of the cardinal sins of The Amazing Race when they didn’t tell their cab driver to hang out while they took part in the roadblock. Having already been one of the three teams to get on board the later flight (with John & Jessica and Brendon & Rachel), there was no chance that they were going to be able to make up that kind of time. Rob and Jessica were bummed out because we didn’t really get to see any of the fun antics of Joey Graceffa and Meghan Camarena.

Brendon and Rachel vs The Rapids

Several of the teams had difficulties navigating the rapids in their makeshift bamboo rafts, but no team struggled as much as Brendon and Rachel. Rob thought it was karma that Brendon and Rachel had issues with their raft after they said how bad John and Jessica’s raft looked. Rob was impressed that Brendon was able to save the day by putting the raft back together.

In addition to Brendon and Rachel, the Afghanimals were left shipwrecked at a few points and were hoping to get a ride from the Cowboys. The Afghanimals decided not to lie to the Cowboys and helped them out and were hoping that the Cowboys might be able to tow them to the end of the course. Margie and Luke also struggled because of the communications challenge that this challenge posed since Luke was unable to see what Margie was saying.

Rob and Jessica sort the Amazing Race’s 8 remaining teams in to three tiers:

Be sure to join Rob Cesternino on Monday when he speaks with Joey & Meghan on his Amazing Race exit interview. Then on Monday night, join Rob and Jessica Liese as they talk to Abba from Amazing Race 22.