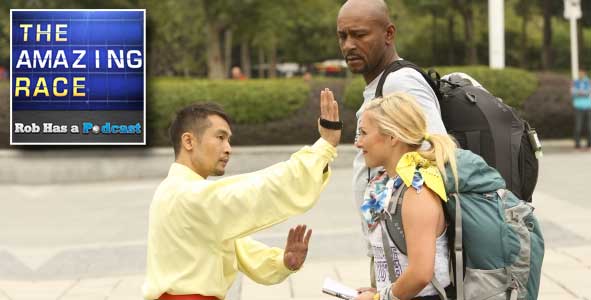 Baby Got Back Pack

After the latest episode of The Amazing Race All-Stars, Rob Cesternino and Jessica Liese recap all the drama that unfolded in episode 2.

Mark and Mallory Implode after Backpage-Gate

After getting out of the roadblock first, Mark and Mallory were looking like the team to beat until Mark realized that they didn’t have his backpack. Though Mallory had Mark’s passport and medication, Mark would insist that they needed to go back to Toy Town to retrieve his backpack because he didn’t want to wear the same clothes for 23 more days and it was somebody else’s back pack.

Rob asked Jessica what the correct decision was and she says that both Mark and Mallory were at fault. It was Mallory’s fault for leaving the backpack behind but also Mark was to blame for the way that he handled the situation. Even though they got back to the detour with enough time to beat out some of the other teams for the last spot, the relationship was too damaged for them to work effectively as a team.

Jen Gets the Express Pass from Cord

It looked like Jen and Caroline were going to be the team to implode earlier in the episode when Caroline was forced to be the one to assemble the toy car. While Caroline looked like she would have no chance to complete the task, Jen started to flirt with Cord.

Jessica thinks it was a great move to give the express pass to a team that is not a front runner and have them burn it immediately. Jessica also thinks Jen and Caroline aren’t being given enough credit for their flirting strategy on the Amazing Race. Rob also loved getting to see Joey and Jessica complain about Jen and Caroline during the roadblock.

It’s been underreported to this point how close Team Youtube (Joey & Meghan) and John and Jessica were in Amazing Race 22. When John looked lost with assembling his toy car, Meghan decided to lend a hand and tell him how to complete the task. Had it not been for Mark and Mallory’s implosion, these two teams would’ve been racing to the mat for last place. Meghan realizes that she probably gave too much help to John and vows to not do the same thing again.

On Monday morning, Rob will have an exit interview with Mark and Mallory to discuss whether or not they have reconciled their differences. Then at 10 pm ET / 7 pm PT on Monday Night, Rob and Jessica Liese will be joined by the winners of Amazing Race 23, Jason & Amy to give their thoughts on the All-Stars