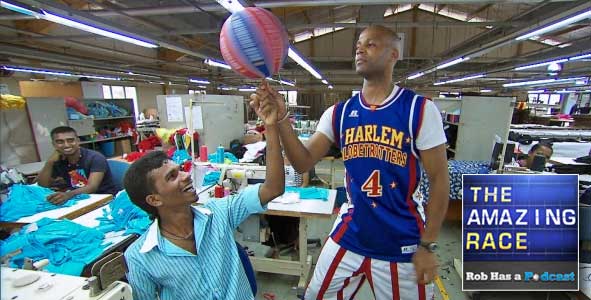 Margie and Luke are Eliminated

There wasn’t very much drama in terms of who would be eliminated in this episode as Margie and Luke were stranded in Malaysia after not being able to board the 11 pm flight to Sri Lanka. Unlike Brendon and Rachel, Margie and Luke chose to wait on a standby flight and weren’t able to get on the flight. They were forced to wait until morning to board a flight and were about half a day behind the rest of the teams for the whole episode.

Unlike last week where Luke showed signs of a meltdown, Margie and Luke went out of the race with their heads held high. Margie and Luke will join Rob Cesternino on Monday for the latest Amazing Race 24 Exit interview on Rob Has a Podcast

Brendon and Rachel Gamble… and it Pays Off

Brendon and Rachel, in the same situation as Margie and Luke, chose to gamble and try to make a connecting flight with only a half hour in between the two flights. Though they got advice recommending that they don’t attempt it, Rachel pushed Brendon to go for it. Despite the fact that it worked this time, Rob wants to know from Jessica if that was the right call to make – Jessica agrees with Brenchel’s thinking and would advise to take the connecting flight (as long as its only one connection).

The only team that had a lot of problems on the detour were John and Jessica. Rob wants to know from Jessica Liese how a team would know when it’s time to switch out on the detour. Rob especially enjoyed watching Leo in the garment factory and he and Jess discuss how it would not have been legal for Leo to allow anybody to help him sew for his offer of 1000 rupees.

Rob has been so impressed with Dave and Connor and thinks that it’s their race to lose. Rob aslo heaps praise on Jen and Caroline for their second place finish in the race this week saying it’s time to give credit where credit is due.