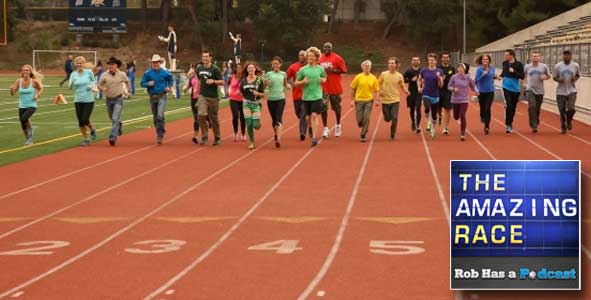 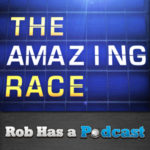 It’s the season premiere of the Amazing Race All-Stars and Rob Cesternino (@RobCesternino) and Jessica Liese (@HaymakerHattie) are back to discuss all of the major stories from opening night.

Bopper Out, Mallory In

In a shocking development, Amazing Race 20 standout Bopper was replaced by Mallory Ervin to run the race with Bopper’s partner Mark Jackson. Bopper was administered to Cedars Sinai hospital in Los Angeles and evaluated by Amazing Race doctors before the Race began. Bopper was diagnosed as having a pancreas condition that would prevent him from competing in the race. At the starting line, Phil Keoghan let the teams know that Bopper was out but would be replaced by a fellow Kentucky contestant, Mallory.

Jessica feels like this is a big blow to Mark’s chances because it is very difficult to run the race with someone who is a virtual stranger. Some signs of trouble show up in the premiere episode when Mark and Mallory argue over the clue to get to the stadium that is on the river in Guangzhou, China. Overall, Mallory’s pinch-hitting for Bopper didn’t slow them down too much on night one as Mark and Mallory finished in 6th place at the pit stop.

Natalie and Nadiya Have a Complete Meltdown

There were few teams that we were more excited to see back this season for the Amazing Race than Natalie and Nadiya but they would be the first team eliminated from the show. Despite getting on the first flight to China, the wheels came off early as Natalie and Nadiya could not find the bridal gown show that they needed to find.

Once a bit of adversity hit, Natalie and Nadiya began to turn on themselves. Rob thinks that their panic caused them to swap partnerships too fast in this leg. Shortly after they ditched the Afghanimals, they found the clue and ended up in 7th place. The editors of the show completely showed ever bit of the collapse in favor of trying to make it seem like it would be a footrace to the map against team Youtube. While the Twinnies will be pissed, they definitely left a lasting impression that we won’t forget.

Cowboys Finish First? Who Gets the Express Pass

Jessica was not surprised at all to see Cord and Jet aka The Cowboys come in first on leg #1 in Amazing Race All-Stars. As three time players, Jess feels like this should have been a very simple leg for the pair. As the winners of the first leg, the Cowboys will now get to decide who gets the second express pass. Both Rob and Jess think that the Cowboys owe it to the viewers to give the express pass to John and Jessica just for the comedy value.

Subscribe to the Main Feed of Rob Has a Podcast (All Shows:)