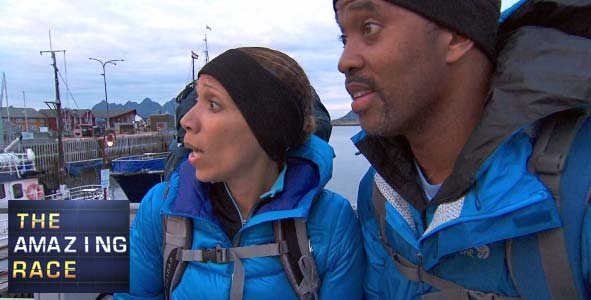 Rob and Jessica discuss this continuation leg. Jessica feels that the “super leg” has its place and it pushes the racers to limits that we would have never seen otherwise. Rob loved the ending to this episode when Brandon and Adam were really excited to keep racing. He feels that Phil doesn’t get enough credit for how excited he is during the check-ins. However Rob thinks the continuation legs are similar to the non-elimination legs in which they don’t really matter to the overall outcome of the Race. Both Jessica and Rob feel that the viewers are cheated with these types of episodes as the viewer’s look forward to seeing a team eliminated.

Rob brings up how the double Express Pass brings a new element to the game. Jessica mentions how the producers give a team a double Express Pass to encourage interaction and to cause drama. Jessica thinks the second Express Pass is working because it was given to a dynamic team in Tim and Marie who knows how to really use it to their advantage. Rob calls Marie the villain of the show, but says that both he and Jessica like her on the show. Jessica calls her interesting and says that she is creating a lot of conflict on the show. Rob called Marie’s strategy the “Carrot on the Stick” strategy with the bribing other teams with it for help. Jessica thinks that her strategy won’t work because eventually they find out that Marie will not give them the Express Pass.

The cliffhanger ending is discussed.  They think Marie got a case of Race Brain in which she really wasn’t thinking when she got the offer. Jessica thinks it is hard to tell whether or not she will give it up because decisions on the race are very impulsive. Rob thinks she will give the Express Pass to Nicole in exchange for the location of the pit stop. Jessica thinks that move will foster goodwill with the doctors.

Jessica would give the Fishy to Nicole or to Brandon and Adam for telling Marie to essentially “Kiss their ass” when dangled with the Express Pass in exchange for help finding the pole in the fish task. She believes that Nicole had a mercenary side to her this week and she wishes this side of Nicole came out sooner. Rob compares Tim and Marie to Brenchel from TAR 20, because they raise the drama and really cause the lines in the sand to be drawn between the teams. They both feel this season of TAR has raised the bar in terms of conflict between the teams.

Rob discusses Jessica’s blog in which she mentions how the show has really focused on Marie and the Express Pass and how it has only showed it from Marie’s point of view. Jessica feels this is because reality TV loves a bitch. Jessica feels that Tim is just as much as a conspirator as Marie is, but he is not as active in it as she is.

Jessica feels that Reality TV in general has a problem with sexism. Rob references an article written by Linda Holmes about Sexism and Survivor. Jessica thinks Amazing Race is the least offender in terms of Sexism. In order to alleviate the sexism, Jessica feels that casting needs to break some of the stereotypes it casts of women when it comes to casting. She feels the show needs to be casting more well-rounded women, and not ones that support men in professional sports roles. Rob feels like this season is not a shining example of a cross-section of women in America and Jessica agreed. Jessica feels that the adoption of the Ice Girls (Ally and Ashley) adoption by the Afghanimals as their race wives proved that point. Rob feels that the Baseball Bunnies (Kim and Nicki) have held their own in the challenges, but referring to themselves as Bunnies pushes them into that mold.

Rob discusses Tim and Danny and how they had the opportunity to help the Ice Girls drive a stick shift in the rock moving challenge. Jessica feels that they should know how to drive stick before going on the Amazing Race, and he feels that it falls into Team Oklahoma’s character to help the Ice Girls drive the stick shift. She also feels that their character could cost the race for Tim and Danny. She admires Team Oklahoma’s ability to stay neutral in the race.

Jessica is unsure what happens to Tim and Marie should they get the clue from Travis and Nicole. Because the clue was tied to a bag and that bag came undone, there is a chance that they will not be given a penalty. If they are given a penalty, it will require them to go back and retrieve the clue anyways.

Jessica did not think the detour choices looked that bad. On a scale of 1-10, Jessica rated the Cod Head task a 6.5 and Hammer of the Cod an 8 in terms of difficulty. She feels the easiest task in Race history was a Fast Forward task that involved eating a Beef Pie or the Beekman Boys eating Turkish Ice Cream. She feels that unrolling the Haybales (TAR 6) was one of the hardest tasks along with the Sandcastle destruction (TAR 22). Rob discusses how he likes the Cold Weather legs on the race and Jessica feels that this leg is the coldest leg that they will have on this race.

Rob mentions what a great leg Brandon and Adam had. Jessica did not expect to like them as much as she does. Rob mentions Maries comment that they “Eat gross stuff and do gross stuff all the time”. Jessica feels that they should not be offended by anything Marie says. Rob calls them fan-favorites and Jessica likes them because they are just acting natural as opposed to the Afganimals who are bluntly trying to be funny.

Rob challenges Jessica to name five things that Jason and Amy did this week. The alliance they made with Nicole and Travis was mentioned, along with a bonus clip of them. Jessica struggled until she remembers how Jason could not find the ball to release him during the bungee cord task.

A listener points out how the fact that there was only one flight out was an indicator that it would be a non-elimination leg. Jessica feels this is a pretty good indication and that we are overdue for one.

Rob calls this cast likeable and references how the majority of the teams have a following. Jessica mentions how you might not want to hang out with this cast, but they make good television.

Rob thinks Tim and Marie will be u-turned and that the Express Pass may be used. Jessica feels there are at least one and a half teams that would have a problem u-turning them. Jessica wants Travis and Nicole to use the U-turn on Tim and Marie and Rob selected Brandon and Adam.

The beards would be great winners in Jessica’s eyes, but points out the fact that they didn’t have a great edit in the early legs in the race. Jessica has been disappointed by her preseason pick, the Afganimals and feels that they have taken a 180 of how they were portrayed pre-season.

Rob and Jessica both feel that there is not much to learn with the metric system and teams should know it before stepping on the starting line on the race.

Rob addresses the rumor that next season is Amazing Race All-Stars, and asks Jessica if she would give a one day crash course on how to be on the Amazing Race. Jessica feels you can learn everything you need to be on the race in the course of a weekend.

Jessica thinks that the teams will have a little time to recover after the fish task before they start the next leg because they will be flying. Both Rob and Jessica feel that the shorter beard does not look like Rob and he feels that he looks most like Chester on the race.

Jessica feels Marie was the kid who threatened to tattle in school and feels her strategy wasn’t cheating or smart game play. Both Rob and Jessica felt the placement of the Ford truck wasn’t egregious and that it fit the episode.

Join us next Monday Night when we will be live featuring Amazing Race winner Uchenna Agu who was on Seasons 7 and 11.

Special thanks to Mike Shaheen for the Amazing Race Recap