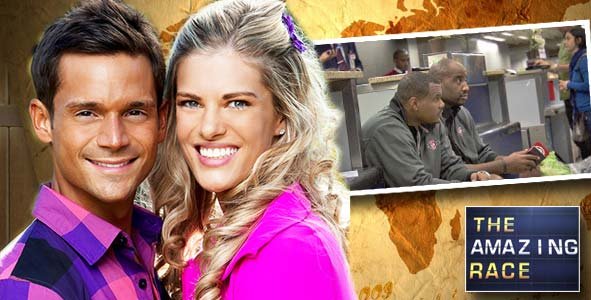 What do Max & Katie have to say about Amazing Race 23 Episode 3?

This week, Rob Cesternino (@RobCesternino) and Amazing Race blogger Jessica Liese (@HaymakerHattie) were joined by the Amazing Race 22 runners up Max (@MrMaxBichler) and Katie (@KatherinBichler) to discuss the third episode of the Amazing Race 23 (King Arthur Style) which sent teams from Spain to Portugal.

The conversation starts out with the misfortune that Chester and Ephraim had in this leg of the race. Max noted that in the 25th minute of the episode, they were so on travel, so it accurately showed the travel length that the teams actually go through. Katie said that they Chester and Ephraim should have stuck with the pack.

Jessica thinks that the ticket agent cost them the Football Players their race and that she was the most incompetent ticket agent ever on the race. Max points out Bates and Anthony like the football players where they were given a ticket for the wrong day, but it was never aired because it was corrected in time. When put in Chester and Ephraim’s shoes, Max and Katie would not have taken the flight with two connections because it was too risky and think they should have stayed with the pack. Katie recommended booking back-up tickets just in-case, and Max clarified they are able to buy as many tickets as they want as long as they are refundable. Rob points out that Chester and Ephraim broke one of the Amazing Race 10 Commandments in “Thou Shall Not Book a Flight with More Than One Connection”, and it cost them.

Max and Katie expressed they were surprised by the fact that this leg was a non-elimination leg because the Football players were popular. Jessica and Rob echoed that, and Jessica said that was the first time that Phil has ever met a team at their flight. Max and Katie said that by meeting them at their flight, they did Chester and Ephraim a favor by not having them finish the leg.

Rob mentions how Tim and Marie have been made into the villains. Max said that it would have been bad to race with Marie, because their styles would not have meshed well because she is too assertive and catty. Rob points out that Tim and Marie had an alliance with the Baseball Bunnies (Nicky and Kim) and how they broke it. Katie said that the Bunnies pulled a slick move and Marie over reacted. Max summarized it by saying “If you aren’t behind her, you aren’t making her happy.”

Max thought that in his season, there was no chance of him getting the Express Pass and thinks campaigning for it is futile. Rob asks if Marie is waiting for someone to tear an ACL to give away the Express Pass, going back to the Amazing Race 22.

Rob brings up the new alliance between Travis and Nicole and Jason and Amy. Max called the alliances this season disturbing because he has never waited for a team and suggested doing a task together. Jessica’s stance on alliances is “Why Not?” because you will finish first and second anyways. Going back to this week’s detour, Katie said they would have done Miles if given the choice, but brings up the fact that you also need to take into account how close the tasks are. Max said they would have started with Miles and switched to Tiles if they struggled.

The discussion turns to the Tiles task and the fact that Marie broke a tile. Jessica thought that meant that Marie and Tim needed to start again. Max referred to the judges as people who nod their head and smile as they hand over the clue.  He also refers to the editing with challenges and how no one would know how many tries it took on the arrow task unless they said “Yes! First try!” Max calls the Express Pass a huge curse, and said that it causes you to second guess everything and encourages quitting and says he is glad he never had one.

Rob brings up the fact that Jason and Amy is on the race to test their relationship. Max calls that a horrible strategy and he thinks that’s sort of a tired story. He does say though that the testing the relationship story is created by the producers. Katie doesn’t resent Ally and Ashley for not being Buffalo Sabers ice girls. Max said they didn’t spike their radar since they have been in the middle and their character hasn’t developed. They are impressed by the Baseball Bunnies since they expected them to be frazzled by the race because of the lives they live.

Jessica addresses the intellectual fails with the Miles task, such as Tim and Danny forgetting the world is round and the Afganimals forgetting the Panama Canal was not made yet. Max refers to those sorts of mistakes as Race Blinders because it is easy to make mistakes and think out loud.

Max mentions the fact that they weren’t mentioned much on RHAP on their season. Jessica says this is because she didn’t want to reward villainy. Rob brings up the car accident that Jason and Amy were in their cab. Max and Katie said there is no way the cabbie left as quickly as he did.

Rob then goes into the viewer question. Max and Katie thought that Phil’s greeting to Tim and Marie, calling them “The last team to arrive besides one” a new one and that they thought it would have referred to a non-elimination race. The fact that Chester and Eprhaim were by themselves is brought up and Max and Katie said they almost were in that predicament, but it’s situational.

Max and Katie thought that given two good legs, Dave and Connor would have done very well on the race. They called them the best of both worlds and referred to the fact that even with one leg they beat a lot of the younger teams. Max and Katie think the rivalry with Joey and Megan started because they didn’t realize that it is a game. They have been unable to connect after the game and Megan calls them immature. Max refers to the fact that Joey and Megan thought that he was a bully and that they should have been able to put aside the game in real life. They are not subscribed to his channel on YouTube and say that they get death threats from his subscribers. Max and Katie say they are in touch with Chuck and Wynonna and spent the fourth of July with them. They said they are in touch with everyone else from their season minus Jessica and John and they even had beers with Mona and Beth who they didn’t like on the race.

Max and Katie clarify the rules that the ticket agent could have upgraded Chester and Ephraim to first class. They cannot buy first class seats, but they could be upgraded at no charge. Max does not think the Football guys are not memorable enough for an All-Stars season. Max thinks Caroline and Jen remind them the most of Ashley and Ally. He also thinks that Bates and Anthony would only root for Ally and Ashley if they are on the show with them. Looking back at S22, Katie thinks the Sandcastle task was the worst task on their season calling it even worse than the notorious haybale task.

Max turns the tables on Jessica, asking if she would consider applying for the race. She says she would not be cut out for the Amazing Race.

Join Rob Cesternino and Jessica Liese next week as they recap the next leg of the Amazing Race on Monday at 10:15 with a special Amazing Race guest!

Special Thanks to Mike Shaheen for this Amazing Race recap