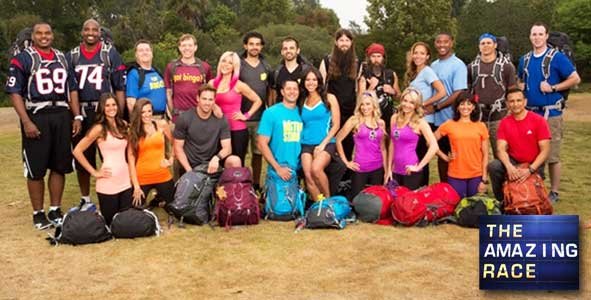 Who will win The Amazing Race 23

Ally & Ashley are friends that both work for the L.A. Kings as Ice Girls who come out and clean up the ice in between periods at hockey games.

We don’t know if Brandon & Adam are hippies or metalheads, but they’ve got big beards and they are best buds.

Long-time friends who both played in the NFL, including one season when they both played for the Houston Texans.

A Father & Daughter team with an Indian background, we’ll see if H.B.’s rigidness will work on The Amazing Race

Representing Boston after last April’s Boston Marathon bombing, Jason & Amy are a dating couple looking to test their relationship on the race

These cousins are better known as the Afghanimals… which we don’t really know what that means, but it could be fun.

Nicky and Kim are respectively the wives of Major League Baseball players, Chris Getz and David Dejusus.  Rob is rooting for them simply for the amount of Giles-like baseball puns that can be made.

They’re best friends and business partners in a show where they dress in drag and talk about Bingo… I’m in.

They’re this years “Fish out of Water” team, we’ll see if these two friends from Oklahoma can make it as they experience the world for the first time.

They’re ex-boyfriend and girlfriend, which we can only hope will lead to a lot of fighting this season

Married ER Doctors who seem to not flinch under pressure.