Rob Cesternino is joined by Amazing Race blogger Jessica Liese to talk about this week’s wild episode of The Amazing Race 22. The episode featured the season’s second Double U-Turn and ended with Joey and Megan aka Team Youtube being eliminated. 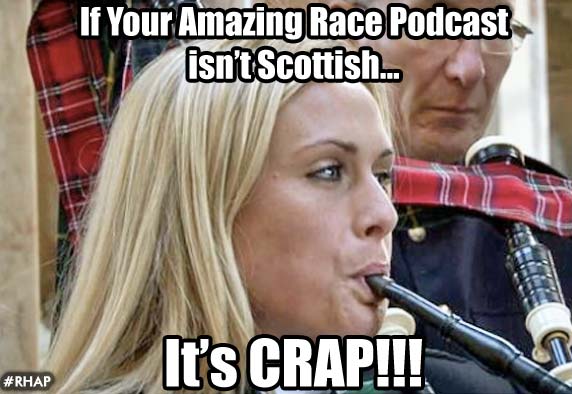 The race started with the teams heading towards Edinburgh, Scotland to race to Gosford House to place the bagpipes. The country singers Caroline and Jennifer would have a hard time as Caroline was not able to blow for an extended period of time. Bates and Anthony and Max and Katie went off to go and do the Barrel Rolling and Tasty Pudding challenges respectively. Eventually the country singers would join Max and Katie at making Haggis.

The second half of the show focused on the exploits of Joey and Meghan vs. Mona and Beth in a race for fourth place. Meghan struggled with the bag pipes but the Roller Derby moms needed to complete a speedbump, playing Skittles, which is like bowling without the holes. After Mona and Beth finished their haggis making first, they realized they were u-turned but were able to roll their barrels faster than Joey and Meghan, thus eliminating Team Youtube.

Rob wanted to know if Jessica felt like the alliances had the write idea working together to u-turn the two teams from the other alliance. Jessica doesn’t believe that it makes a big difference and ends up alienating you from the other teams in the long run. Rob also asked Jessica if she believed the race was as close as it appeared and they both thought the show made it seem like a closer finish than it probably was.