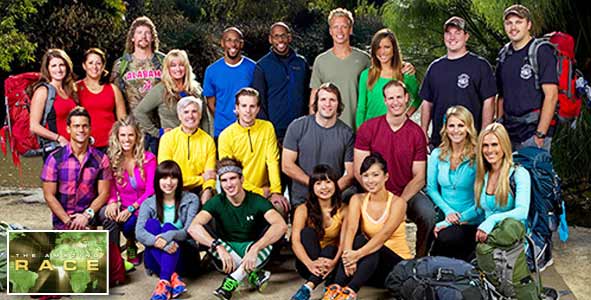 Which of these color coded teams will win The Amazing Race 22?

Rob Cesternino is joined by RHAPorter Jessica Liese (@HaymakerHattie) to preview season 22 of The Amazing Race.

Rob points out that they are twins but Jessica hopes that they are more grounded twinnies than last season. They are both doctors (OB/GYN’s). You can tell them apart by their glasses. Jamil was in the army but we are uncertain if Idries was. Jessica feels good about this team as they are smart and in good shape. One concern is that they are self-confessed super fans. Super fans tend to approach the race with preconceived notions then do not adjust well to surprises. They do seem like the most capable super fans in recent years. Rob feels good about this pair. Jessica feels this is a likable team but is reserving judgment. Jessica also mentions that twins often do not do well on TAR because they have the same strengths and the same weaknesses, lacking in balance.

Max and Katie are approaching the race as if they want to be the villains of the season. in their video, they were all business and did not smile at all. Rob points out that this is not usually a good strategy because it causes the other teams to target them. They also seem to be overly concerned about what other teams will think about them, which Jessica explains tends to be a negative. Jessica asks Rob, as a veteran commentator of many reality shows, what possess people to go on reality shows with the specific intent to be hated? Rob explains that he believes it comes from insecurity. They feel they can not be famous, so they strive to be infamous. Jessica labels this team as a bickering couple. They haven’t spent a lot of time together, dating long distance until recently, so we expect communication issues. Max also comes across as douchy, as a cigar lover sporting a faux-hawk who thinks he reminds people of Rush Limbaugh. Katie puts too much emphasis on her education, with a Doctorate in Pharmacy, which Jessica points out is good, at two years ahead of schedule for a 24 year old, but nothing overly impressive. Overall, we are hoping this team does well as they should prove to be entertaining. Ultimately, we would like them to make it all the way to the finals… then get skunked in the end.

Anthony and Bates are professional hockey players. Bates was the only one of the two who was actually in the NHL. Rob asks Jessica if Bates is the Jeff Kent (Survivor S25) of TAR. Jessica explains he is not even close, after spending only a few seasons in the NHL. (Editor’s note: Come on Rob… you would need a player with the stature of former LA King and Colorado Avalanche Rob Blake to make the comparison). Rob wonders if CBS was banking on the NHL strike continuing the entire season, drawing in hockey starved fans. These brothers have travelled a lot, seem bright and are strong. Jessica believes they have the right personality for the race. This team fits the dude/bros team stereotype.

Chuck reminds Rob of East Bound and Down’s Kenny Powers. This is one of the two redneck teams this season. Both Rob and Jessica are rooting for this team. Chuck’s inability to keep a straight face when saying “they’re in it to win it” is cause for concern in Jessica’s eyes. Rob wonders if they are really on the race to have the holiday of their lives. He is concerned the culture shock and lack of travel experience may be their downfall. Jessica and Rob will be rooting for this team, but they both do not feel things will go well for them.

This father and son team are both cancer survivors. Decked out in the Livestrong outfits, we wonder if they are now regretting this fashion choice. Rob, humorously, asks if there needs to be any drug testing for this team (also pointing out that we are really only poking fun at Lance Armstrong, not David and Connor). Jessica thinks this is the most fit parent/child team in many seasons. They also seem to have a strong bond. We believe they will go far in the race. Jessica also seems to be enamored by David, referring to him as a dilf.

These two are in a band and were almost reality show veterans, cast on a show for descendants of famous people. The show never made it to air but they had music in common and formed a band. Rob points our that this team is one of the least favorite teams according to the social media tallies on the CBS website. Jessica, being a Caroline and Jenn apologist, wonders if it is because they are further down the list on the site. Caroline is a descendant of Daniel Boone while Jenn is the granddaughter of John Wayne. Jessica wonders how bad the third member of the band feels for not being on the race. This team seems friendly and upbeat. They are endlessly charming but will probably stumble as soon as they face some adversity.

Joey and Meghan seem to have high ratings on the social media levels. This team are YouTube sensations but neither Rob nor Jessica are familiar with their work. They have separate channels and became friends by cross promoting each other. Jessica thinks they really are not that close of friends but see this as a good opportunity to play up their friendship for their YouTube careers. While the same age as cancer survivor Connor, they seem to be a generation apart. This will not bode well for this team and will be eliminated early. The will get a lot of exposure for their YouTube videos. They are likeable but probably will not last on the race.

This is a dating couple that Jessica believes may get engaged while on the race. Rob is concerned about John and Jessica. He feels they are overly tanned. They are surfers but probably spend a lot of time at the tanning salon. Rob hopes they do not travel anywhere cold. Their skillset is probably not going to help them on the race (computer coding and selling health supplements). Jessica did finish the Boston Marathon and, if she qualified by time, this could be a good indicator for this team’s physical ability. Compared to the other dating couple on the race, Max and Katie, John and Jessica are the likeable pair that will get along with everyone. The other teams will not see them as a threat.

Matthew and Daniel are the second redneck team this season and come across as proud rednecks. They are firefighters and friends. Jessica feels that this redneck team that will go the furthest. She feels they are most likely to be saved by a non-elimination leg. They are a “Mark and Bopper” type team that we are going to like and want to go far in the race.

Jessica wants Pamela and Winnie to live up to their bio and win but also has a cynical pick of Max and Katie.

Rob’s prediction to win is Pamela and Winnie with a backup team of the twinnies, Idries And Jamil.

The premier of The Amazing Race is on Sunday February 17th on CBS.