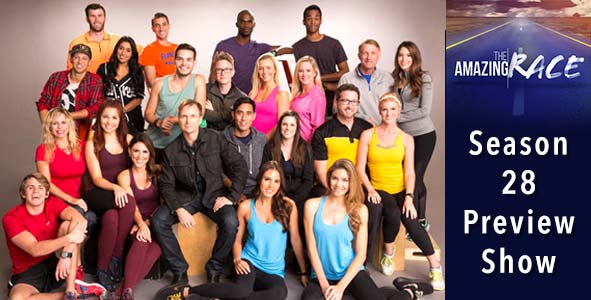 We preview the cast of season 28 of The Amazing Race premiering on February 12, 2016 on CBS

Rob Cesternino (@RobCesternino) welcomes Chief RHAP Amazing Race correspondent, Jessica Liese (@HaymakerHattie) to preview the cast of The Amazing Race 28.  This time around Rob and Jess will draft their own fantasy teams to represent “Team Rob” and “Team Jess” in Amazing Race season 28.

(4:58): Rob and Jessica outline the rules for their snake draft:

(12:21): With the first pick for Team Jess, Jessica Liese selects Professional Frisbee Players Kurt & Brodie. Jess feels like, given the nature of the race and the way she has seen it play out over the course of 27 seasons, this team of “dudebros” has the best chance to win. She also sees them as potentially compelling characters, capable athletes, and seemingly intelligent guys. Jess also notes that Kurt has beaten cancer, which is an indicator of his ability to overcome adversity.

(20:30): With the first pick for Team Rob, Rob Cesternino takes Youtubers and friendsTyler & Korey. Rob notes that both Tyler and Korey are podcasters, which he likes. He also appreciates that they seem very excited to be involved in the Race, especially given that Tyler is probably the most well-known individual in this group of social media personalities. Rob also feels that they will probably be well-received by the other teams.

(25:40): With his second pick, Rob decides to go with engaged choreographers Dana & Matt. Rob likes that this is a team made up of two people who know how to dance and will be coordinated, something Rob says he is always looking for from potentially successful teams. He also likes that, like his first team, this team works together on Youtube videos, so they probably know how to come together in stressful situations, which will go a long way on the show.

(29:25): With her second pick, Jess chooses best friends and ‘Clevver’ hosts, Erin & Joslyn. Jess thinks Erin and Joslyn showed both energy and intelligence in their preseason video segment, and that they are the kind of fun, quirky girls’ team you do not see very often on The Race. She also views them as a team that will balance each other out well. However, Jess notes that their downfall could be not taking the competition seriously enough.

(32:20): With her third pick, Jess decides on dating ‘Rooster Teeth’ hosts Burnie & Ashley. Jess and Rob both agree that this is a pair that has been together a long time and really gets one another, which is always a big positive for the race. Rob also notes that they talk in their video about how playing games for a living will translate well to The Race. Jess thinks there probably are some advantages, including knowing how to compete in high-pressure situations.

(38:16): With his third pick, Rob chooses newlyweds Zach & Rachel. Rob notes that Zach is very talented, and does a lot of amazing videos on Youtube and Vine, and Rachel helps him coordinate and organize everything. Rob feels like this will be another team that could be successful due to their history of working together and really knowing how each other operates. He also thinks there is a good chance that they bring a wide variety of skills to the table between them.

(46:13): With his fourth pick, Rob goes with Vine personalities and brothers Cameron & Darius. Rob says that for their age, both Cameron and Darius seem like intelligent guys, and they are clearly athletic. Jess agrees that their age may be an obstacle for them, but she also thinks they seem very funny and are definitely capable of winning The Race.

(49:29): With her fourth pick, Jess decides to select the mother and daughter team ofMarty & Hagan. Jess mentions that of the three parent/child combination teams on this season, this is the one she sees making it the furthest. Rob disagrees, and says this was the team he had dead last in his rankings. Jess notes that while other teams would tell you how they were huge fans in their video packages, Marty & Hagan actually demonstrated their love of The Race. She also thinks the fact Marty’s Youtube channel is one of the least known ones among all the teams probably bodes well for them. Rob comments that there may be merit to the idea that flight attendants have an edge when it comes to booking airfare on The Race. However, Rob disagrees with Jess about how Marty’s anonymity will be received, as he believes teams will be most likely to U-Turn or otherwise screw over Marty and Hagan because there is no fear of repercussions outside of the game. Jess, however, likes their chances, and thinks their personalities are balanced well for them to have success.

(58:04): With her final pick, Jess goes with the mother and son team of Sheri & Cole. Jess argues that of the teams left, this one is the strongest and probably brings the widest array of different skill sets to the table. Rob agrees, and says he would have picked them next had Jess not gotten there first. Rob likes what he has seen from Cole on his videos on Vine, and says that while Cole’s young age is worrisome, his faith seems very important to him, which could be something that helps keep him humble and grounded. Jess agrees, and says that Sheri seems like someone who is adaptable and ready for the adventure.

(1:02:29): With the final pick in the Amazing Race 28 draft, Rob is left with a choice between the father and daughter tandem of Scott & Blair, and Instagram models and friends Jessica & Britney.

Although Rob likes that Scott is a doctor, he ultimately chooses Jessica and Britney as his final pick. His feeling is that, while they could very well be the first team out, they also have potential “cheerleader upside.” Jess agrees, and thinks they very well could fly under the radar during The Race. Rob also feels like, if they wanted to, Jessica and Britney have “the flirt card” to potentially deploy at their disposal. Jess notes that flirting can often be very successful on the race, and the “flirty team” often does surprise with their performance.

When it comes to Scott and Blair, who were not chosen in the draft, Jess feels that Scott’s age will really work against him on this season, as it often does on The Race. Rob worries that Blair’s lifestyle as a beauty blogger may not translate well to flying all over the world the way they will have to on The Race. Jess also points out that the father and daughter teams rarely do well on The Race.

Use This Banner And Get Your First Two Meals Free