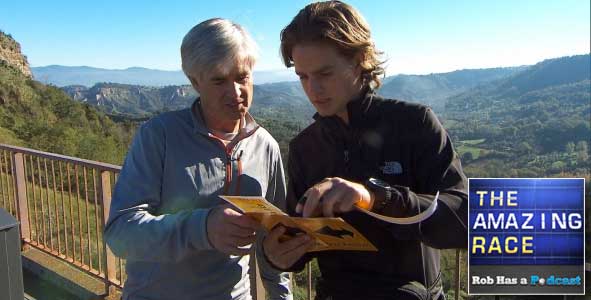 On this week’s edition of the Amazing Race RHAP-up show, Rob and Jessica discuss the fallout from this week’s inclusion of the Double U-Turn.

After Brendon and Rachel decided to use the Double U-turn on Dave and Connor (to try and make sure they won this leg of the race), Dave was not a happy guy. Dave proceeded to complain that he was 60 and that wasn’t right to U-turn him. Dave also said that he was going to kill Brendon and that Rachel Reilly was scary looking. Rob and Jessica discuss the sudden bad sportsmanship from Dave and whether he has a case to be annoyed about the Double U-Turn.

Brendon and Rachel win Another Leg of the Amazing Race

Brendon and Rachel’s plan to detour Dave and Connor paid dividends as they were the first time to arrive to the pitstop.  After using their express pass, The Cowboys were able to make it to second place this week.  Leo and Jamal overcame their Double U-Turn to come in third place.  Dave and Connor also survived their own U-Turn to come in fourth place in this leg.  Jen and Caroline avoided elimination and came in 5th place this week.