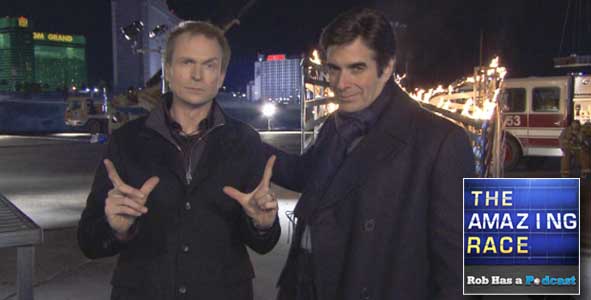 Amazing Race 2014: David Copperfield works his magic in the Finale of The Amazing Race All stars

After the finale of Amazing Race All-Stars, Rob Cesternino and Jessica Liese get together to recap how Dave and Connor became the winners of Season 24.  Join Rob and Jessica as they recap Season 24, Episode 12 and take your questions on this Amazing Race Podcast

When the final leg of the Amazing Race shifted to Vegas, the three final teams had the opportunity to work with legendary illusionist, David Copperfield.  The task involved a teammate getting into a wooden box and then escaping before the box burst in to flames.  After each time the box was destroyed the teammates would come away unscathed, dressed as a firefighter.

Brendon and Rachel Have Taxi Trouble

After the teams left David Copperfield, they travelled by Taxi to the Neon Boneyard.  While Jen and Caroline had an amazing cab driver, Brendon and Rachel feuded with their driver.  The more Brendon and Rachel asked her to drive fast, it seemed like she would get slower and slower.  Eventually, Brenchel tried to steal Jen and Caroline’s cab, but the driver wouldn’t allow it.

The Final Task: Jumping From a Helicopter

The last roadblock on the Amazing Race All-Stars caused the teams to jump from a helicopter on to the Vegas Speedway.  Dave landed first and he and Connor became the winners of the season.  Jen and Caroline came in second and Brendon and Rachel would finish in third.  Though Brendon and Rachel wanted to win the race so they could have a baby – they will have to wait for Brendon to finish his PhD.

On Monday, Rob Cesternino will have interviews with the winning team, Dave and Connor, plus interviews with Jen and Caroline and Brendon and Rachel.  Then Rob and Jessica will answer your questions LIVE on our Amazing Race Live Show on Monday at 7 pm ET / 4 pm PT.