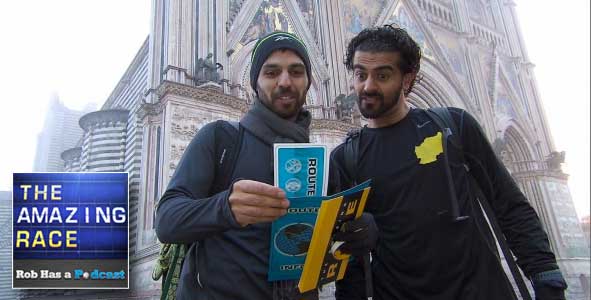 After last week’s incident where Dave and Connor were U-Turned by “The Brenchels” aka Brendon and Rachel, Dave and Connor continued to have hard feelings. The sympathy for Dave and Connor from Jen and Caroline and The Afghanimals manifested in to a full fledged Final 3 alliance called, “The Accidental Alliance”. The three teams in the alliance (and to a lesser degree, Jet and Cord) worked to prevent Brendon and Rachel from advancing to the next leg in the race. However, Brendon and Rachel were able to come in fourth in this leg and would have been spared had it not been a non-elimination leg.

Jen and Caroline Get Saved by a Non-Elimination Leg

Jen and Caroline looked like they were going to be the next team to get eliminated but they were saved by a non-elimination leg for the second time this season. Caroline struggled to haul the large cans of milk in the detour towards the end of the leg of the race. Jen and Caroline had been helped earlier in the leg when The Afghanimals helped determine what year their Ford Mustang was released.

Dave and Connor, The Cowboys and The Afghanimals have a footrace to the mat

This week, first place was decided by the narrowest of margins. Though Dave and Connor were the first to arrive to Mount Titlis, they were soon joined by The Cowboys (Jet and Cord) and The Afghanimals (Leo and Jamal). All three teams would ride the gondola up to the top of Mount Titlis. In a mad dash, Dave and Connor veered right while the other teams went left and found themselves as the first time to arrive to the mat on this leg. For winning this leg of the race, Dave and Connor each got a brand new Ford Mustang.

Join Rob and Jessica LIVE this monday night, 4/28 at 10 pm ET / 7 pm PT to discuss this week’s episode with Brennan Swain – winner of The original season of The Amazing Race.