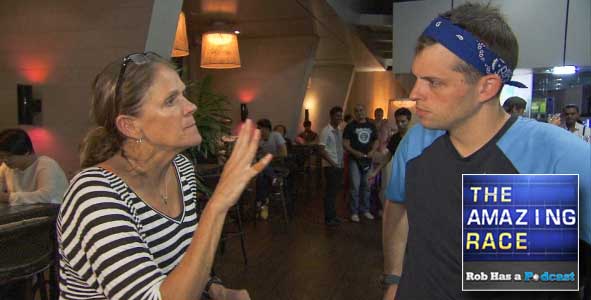 Rob and Jessica discuss the fourth leg of The Amazing Race All-Stars which brought the racers to Malaysia (where much of the world’s attention had been focused this week).  The pivotal part of the leg was the detour that took place at the Sky Bar night club.  The teams were tasked to either become Mix Masters or perform the Master Mix (Rob and Jess were a bit confused as to which task was which).

Rob asks Jessica about the decision to be a good person vs. the strategic benefit from capitalizing on Luke’s meltdown.  Jessica thought there is a fine line between being a good person and being a good racer.   Jessica agreed with the decision for Brenchel to not take the time penalty because she felt like it would set them too far back to start the next leg of the race.

Luke Has a Meltdown and Breaks All the Glasses

Had it not been for Brendon and Rachel, we may well have seen Luke and Margie come in last place during this leg after Luke’s frustration with the detour caused him to snap.  Rob asks Jessica to compare Luke’s meltdown to some of the other notable flare ups in Race History and Jessica cites a previous instance when Luke snapped after facing difficulty in the tea tasting challenge.

Rob and Jessica answer a series of questions from the listeners of Rob Has a Podcast about tonight’s episode including: