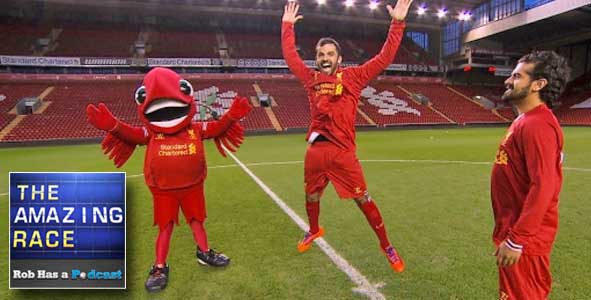 There’s only 1 episode left to determine which of the Final 3 teams are going to be the winner of The Amazing Race All-Stars.  It all comes down to Dave and Connor, Brendon and Rachel or Jen and Caroline to be this season’s winners as The Afghanimals, Leo and Jamal were eliminated from the race this week.  In this episode of Rob Has a Podcast, Rob and Jessica Liese look back at this week’s show, look ahead to the finale and discuss where the Afghanimals went wrong in Episode 11 of The Amazing Race 24.

The Afghanimals, Leo and Jamal are the Latest Team Eliminated from Amazing Race All-Stars

Rob had a bad feeling about the Afghanimals after they got the dreaded FLASHBACK in the editing.  While Leo and Jamal did great in the Liverpool soccer task and made it through the “Poetry in Motion” task without falling too behind, their downfall on this leg of the race occurred when they got lost headed to the detour.  Unfortunately, Leo and Jamal lost so much time that they were never were able to climb up out of last place.  This marks back-to-back seasons of coming in fourth place for Leo & Jamal (Amazing Race 23).

The Afghanimals were able to find much more success as a fan favorite this season compared to last season.  The guys seemed far less inclined to play an under-handed game and worked much harder to create alliances this season.  Though they had two very different approaches, it’s ironic that they had exactly the same results.

Brendon and Rachel chose the “Boot It” leg of the detour and were forced to throw water filled boots across a Welsh field.  The clue said that the boots selected needed to be a size 9 or a size 11, yet Rachel selected a size 10 boot.  After completing the task, the judge looked at the boots and determined that Rachel and Brendon had to go back to the start.  Rachel was devastated but they regrouped and were able to complete the task.  Brendon and Rachel were able to beat the Afghanimals to the mat and now will be one of the final three teams racing to the finish line next week.

Dave and Connor are the First to Arrive… Again!

Dave and Connor continued their winning ways despite having some trouble on this leg of the race.  Dave and Connor were the final team to complete the soccer challenge and Dave joked that he couldn’t score on one of his grandkids.  Then Connor struggled to remember the Welsh poem in the Poetry in Motion roadblock.  However, Dave and Connor made up a lot of time with some crackshot shooting by Connor in the “Shoot It” portion of the detour.  Dave and Connor were then able to beat Jen and Caroline to the mat by figuring out the right way to get to the pitstop.

Join us on Monday to hear Rob’s interview with The Afghanimals, Leo and Jamal.  Then on Monday night at 7 pm ET / 4 pm PT, Rob and Jessica Liese talk with Marie from Amazing Race 23 about the Amazing Race All-Stars.