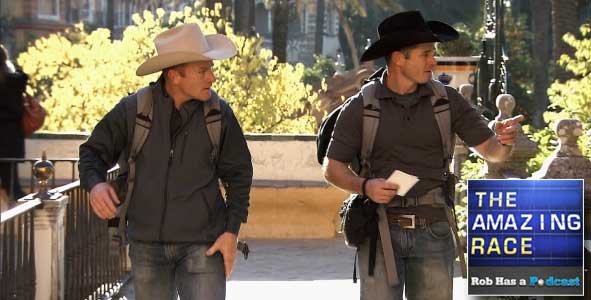 Rob Cesternino and Jessica Liese are back with another Amazing Race RHAP-up to discuss The Amazing Race All-Stars Episode 10.  This week it was the Cowboys, Jet and Cord that were the latest team to be eliminated from the Race.  Be sure to check back on Monday to hear Rob’s exit interview with The Cowboys to discuss their elimination in the race.

Did The Afghanimals Make a Mistake by Not U-Turning Brenchel?

After the last three weeks of non-stop rehashing of Brendon and Rachel using the U-turn on Dave and Connor in the first U-Turn of Amazing Race 2014… the opportunity for payback finally presented itself.  Though Dave and Connor themselves were unable to use the U-Turn (after having used one already this season on The Afghanimals), The Afghanimals were in the perfect position to U-Turn Brenchel.  Instead, Leo and Jamal decided to use the U-Turn on Jet and Cord because they felt like the Cowboys are a better team than Brendon and Rachel.  After Jamal hurt his knee in the bull running task, The Afghanimals thought it was best to take out a physically stronger team.

Jessica thinks that this was the correct strategic decision for The Cowboys to make.  Jessica says that if she were in The Afghanimals’ position, she would’ve done the same thing.  Rob is eager to see the fallout when Dave & Connor and Jen & Caroline realize that Leo and Jamal decided not to use The U-Turn on Brendon and Rachel.

Was the Bull Running Task Too Violent for The Amazing Race?

The bull racing challenge was one of the most physical challenges in recent memory attempted on The Amazing Race.  Throughout the task both Dave and Rachel complained about harsh treatment.  Dave reminded us that he is old and Rachel told us that “she is just a girl” and shouldn’t be getting hit so hard.  Jessica has a zero tolerance policy on any complaints from the teams on The Amazing Race.

The violent nature of the challenge caused Jamal to take an awkward fall during the competition.  For a few moments, Rob wondered if Jamal would need to be medically removed from the game.  Though Leo and Jamal were able to make it to the mat in third place, they did not seem optimistic on how this injury could affect their chances.

How Close were Jen & Caroline to the Cowboys?

Jen and Caroline went missing for a block of time in the episode, which caused Rob to think that they were struggling with their task.  Rob and Jessica discuss if any of the moments between The Cowboys and Jen and Caroline may have been shown out of order to increase the drama that The Cowboys could still be in the mix.

Be sure to join Rob and Jessica Liese LIVE on Monday night, May 5th for our next Amazing Race Google Hangout.  Ask your questions about the final four teams with Rob and Jessica.