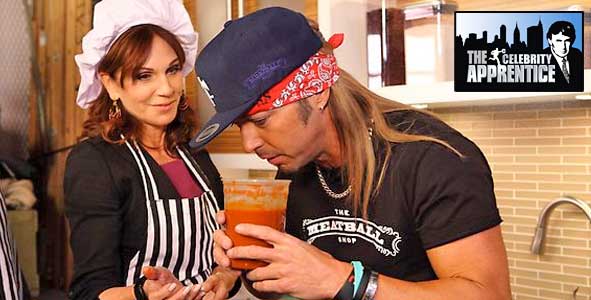 Why Omarosa is POISON to Bret Michaels.
Now playing

Rob starts off be questioning Donald Trump’s decision to fire Bret Michaels, a former winner of Celebrity Apprentice 3, on the first task. Was Donald Trumps decision about Bret causing the team to lose the task that the team took part on or did Donald need to prove that he was right when he said that it was a mistake for Bret to come back. Rob believed that Donald just wanted to show that when he says “don’t do it”, you should listen to him.

Rob and Ryan went in to great detail about the Celebrity Apprentice draft. Ryan and Rob liked Trace Adkin’s first pick of Penn Jillette. The controversial pick came when Bret Michaels used his first pick in the draft to take the most notorious player in Apprentice history, Omarosa. Rob bets that Bret Michaels has never seen another episode of Celebrity Apprentice besides his own season, but knew Omarosa was a famous player. Ryan suspects that Bret felt like if he could get in good with Omarosa that it would be a benefit to him. Rob compares working with Omarosa to the fable of the alligator and the scorpion.

At the end of the draft, Trace had to pick between two of the Celebrity Apprentice’s most colorful and crazy characters: either Dennis Rodman or Gary Busey. Rob and Ryan both agree that Dennis Rodman would be the better pick because he always draws in a crowd for your tasks while Gary Busey is only fun for us at home.

Among the other topics discussed in the show: Donald Trump’s unwavering love for Latoya Jackson, the awkwardness of all things Stephen Baldwin and Rob’s disdain for the praise heaped on the career of actress and singer, Jennifer Hudson.

Subscribe to our Celebrity Apprentice only podcast on iTunes: